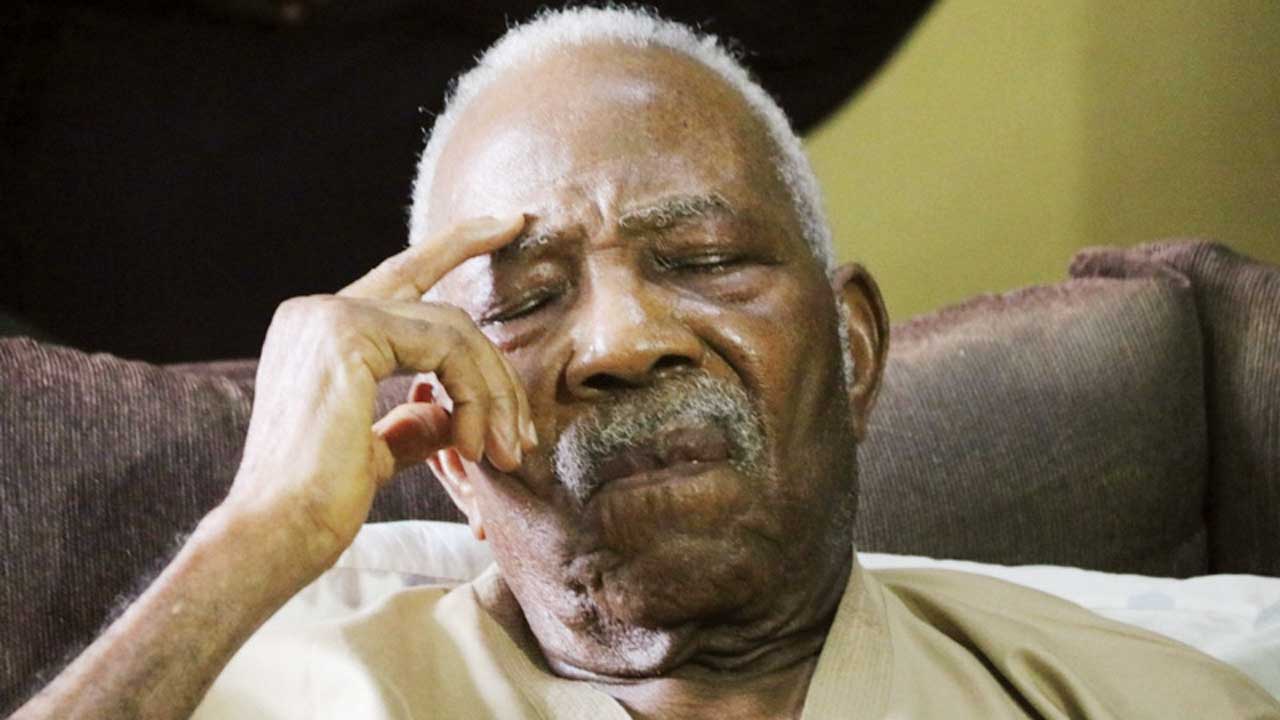 Pa Reuben Fasoranti in a pensive mood at his residence in Akure, Ondo State… yesterday. His daughter, Mrs Funke Olakunrin was killed by gunmen at the weekend. PHOTO: SAM OLUSEGUN

Two foremost Yoruba leaders yesterday differed on the circumstances surrounding the death of the daughter of Pa Reuben Fasoranti, the national leader of the Yoruba socio-political group, Afenifere. While the incident has continued to generate heated debates across the polity, the divergence between National Leader of the All Progressives Congress Bola Tinubu and Ooni of Ife Oba Adeyeye Ogunwusi might further cripple the ethnic group’s chances to curb insecurity through collective action. Mrs. Funke Olakunri was killed on Friday as she traveled to Lagos.

The Ooni declared that the southwest has had enough of killings by herdsmen, saying it is time for the region to unite and defend itself against murderous bandits.“I call on all the people of the Yoruba race at this time to be united. The time has come to end this killing. This killing must end. Enough is enough!” the monarch stated during a thanksgiving ceremony for House of Representatives member, Olufemi Bamisile, in Kota Ekiti, Ekiti State.

His words were reechoed by the officiating minister, Rev. Emmanuel Abejide, of Methodist Church Nigeria, who warned that things could get worse unless the spate of killing stops. But Tinubu faulted claims that herdsmen were responsible. The APC chieftain who paid a condolence visit to Fasoranti told reporters: “I am extremely concerned about security. I don’t want the stigma. I can go through the history of kidnapping in Nigeria and we know how and where it all started. There are a lot of copycats.

“How many years ago have we faced insecurity in the country and cases of kidnapping? Is Evans too, who was arrested and made disclosures, also a herdsman? I don’t want to be political, but I will ask where are the cows?” The Muslim Rights Concern (MURIC) also toed Tinubu’s view when it cautioned against making hasty conclusions on the incident. The director of the group, Prof. Ishaq Akintola, appealed to Nigerians to wait for the outcome of police investigations and avoid ethnic stigmatization.

Condoling with Fasoranti in a statement yesterday, he said: “It is necessary at this point to warn Nigerians against spreading fake news or jumping to conclusions. We must not allow those who have a hidden agenda to destroy this country. Earlier reports had said that the killers were Fulani herdsmen. “But the police who arrived at the scene early enough to rescue seven of the abducted victims said the identity could only be disclosed after the culprits have been apprehended. Benin-Ore road is notorious for kidnapping and armed robbery. Anybody can fall victim. Let us face the criminals and not any particular tribe.

“There are criminal elements in all tribes, just as there are good citizens all over this country. There is nothing like a siege by one tribe on another because kidnapping and armed robbery are crimes happening everywhere.”The Ooni’s position, however, resonated with some Yoruba groups. The Yoruba Youth Socio-cultural Association (YYSA) described as untrue the statement by President Muhammadu Buhari that the country’s security agencies were gaining the upper hand in the fight against banditry, kidnapping, and terrorism. Buhari had made the assertion on Saturday during the graduation of Senior Course 41, Armed Forces Command and Staff College (AFCSC), Jaji, Kaduna State.

In a statement by its national secretary, Olawale Ajao, yesterday, YYSA said: “In fact, there is serious tension everywhere including President Buhari’s home town. Besides, we have been calling on the government to put an end to the activities of killer herdsmen, kidnappers and armed robbers in the southwest region far before Mrs. Funke Olakunrin was murdered. Had necessary measures been put in place, Mrs Olakunrin would not have died untimely.”

The Federation of Ekiti State Students’ Union also decried the spate of killings and other violent crimes in the country, restating enough is enough. In a statement by its national senate president, Comrade Kolade Ifeoluwa, in Ado-Ekiti yesterday, the group asked southwest governors and the Aare Ona Kakanfo of Yoruba land, Gani Adams, to fight for the region before the situation spirals out of control.

“The time for our governors to stand up on our behalf is now. They can count on our support anytime we are called upon in their bid to drive out these criminals from our land,” the union said. Proponents of the “killer herdsmen version” also found alliance far away in the southeast, with apex Igbo socio-cultural organization, Ohanaeze Ndigbo, warning that the death of Fasoranti’s daughter could throw the nation into an “uncontrollable breakdown of law and order.”

In a statement yesterday, the president-general of the organisation, Chief Nnia Nwodo, said the hasty conclusion by the Federal Government that she was killed by armed robbers and not by suspected herdsmen “known to have laid siege to all parts of the country perpetrating acts of banditry and killings further exacerbated the already tense situation.”

The Senate meanwhile has mandated the Inspector General of Police, Mohammed Adamu, to hunt the killers, even as it called for improved security on the nation’s highways. This was disclosed in a statement by the chairman, Senate committee on media and public affairs, Adedayo Adeyeye, in Abuja yesterday.
Vice President Yemi Osinbajo who also paid a condolence visit to Fasoranti, described the death as a “massive tragedy”, affirming that Buhari has taken proactive measures to beef up security through community policing.

But the opposition Peoples Democratic Party (PDP) accused Buhari of trivializing the menace of killer herdsmen. National Vice Chairman Eddy Olafeso in a statement in Akure yesterday, said: “We want to remind the president that he was elected to be our commander-in-chief and not mourner-in-chief. It is his responsibility to make our nation safe from all strife and lawlessness, not to excuse and rationalize them.”

Similarly, the president of the Christian Association of Nigeria (CAN), Rev. Dr Samson Supo Ayokunle, condemned the murder and charged the government to revamp the nation’s security system. He said whether the killing was carried out by herdsmen or kidnappers, “our position is that the security agencies should unmask the perpetrators of this wicked and annoying act.”

In a statement yesterday in Abuja, Ayokunle also commiserated with the families of the deceased. When The Guardian visited the residence of the Olakunris, the husband of the deceased, Mr. Idowu Olakunri, was full of grief. Fondly called ‘Stone’, the widower, who is also the younger brother to the scribe of the Redeemed Christian Church of God, Pastor Simeon Olusola Olakunri, sobbed inconsolably.