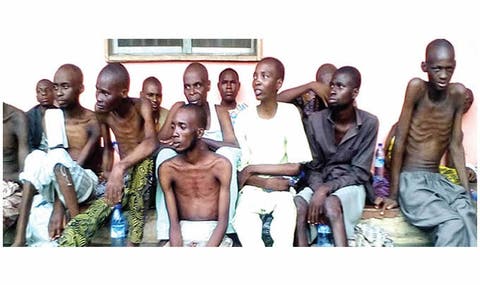 His innocent looks could easily pass him for a gentle, easy-going lad but he’s not. Tall and dark, Abayomi (as her parents want him identified) is infamous for roguery in his vicinity in the Mushin area of Lagos State. Fighting, betting, truancy were the pastimes of the 19-year-old secondary school leaver.

His excesses stretched his parents’ patience as complaints about him poured in from neighbours — old and young.

Overwhelmed by his conduct, the parents sought advice from relations and friends and arrived at a decision they would live to regret for the rest of their life.

Sometime in July 2019, the parents in a desperate move to reform Abayomi took him to a detention camp garbed as an Arabic school at Oloore Mosque on Ojo Road, Ibadan, Oyo State.

They expected that in the next few months, he would return home reformed. But two months into his stay in the torture chamber busted on Monday by the Oyo State Police Command, the once comely young chap had become a shadow of himself; looking pale, dishevelled and sickly.

“My parents could no longer recognise me after spending about two months in bondage. They picked me up and took me back home,” Abayomi, told Saturday PUNCH during the week. “I was down with sickness; they had to get a nurse to treat me for two weeks,” he stated.

On Monday, November 4, an escapee from a torture centre in Apata, Ibadan, had reportedly hinted the police about the horror house and a similar one on the premises of Oloore Mosque in Ojo.

About 259 victims comprising 191 males, 34 females, 11 children and 23 sick persons were rescued from the Ojo detention camp while inmates in the Apata torture chamber were said to have been hurriedly evacuated before the arrival of the police. Nine suspects including an unnamed owner of the Oloore camp were arrested.

“I was happy when I learnt the police busted the place and freed those people. Living there was my worst experience,” the teenager disclosed, lost in deep thoughts as if he was picturing his harrowing stay in the camp.

After assuring the family that his identity would be concealed as demanded, Abayomi opened up to our correspondent about the degrading life he went through at the horror camp operated by one of the clerics he identified as Alfa Olawale.

“My parents bought foodstuffs and many items for me when they took me there, but they didn’t allow me to use any of them,” he began. “They also collected the pocket money my mother gave me.”

Abayomi said he and many others held in the illegal centre usually took a meal per day.

He recalled, “We don’t eat until 2pm every day. They would give us three spoons of rice with poorly-prepared stew; no meat or fish. If we were lucky, we would have the same thing in the evening but most times, they would not give us anything again until 2pm the following day.

“They would bring us out in the morning to pray till 2pm when they would give us food. After eating, they would take us back to our rooms and we would not come out again until the next morning. Whenever my parents visited me, they (the clerics) stayed beside me so that I would not expose what I was going through. If I did, they would beat me after my parents left.

“Relations of one of us at the camp came to pick him. They were asked to bring a discharge fee. When they returned with the money, they said it was the parents who brought him that they wanted to see, whereas the parents have died.”

Abayomi stated that about 28 persons were crammed into a medium-sized room, with many sleeping on bare floor while few ‘lucky ones’ slept on mats. He added that many people were infected with bacteria which the camp operators didn’t bother to treat.

“I was in the same room with Abeeb and Sikiru. Abeeb also came from Mushin while Sikiru was from Sagamu. They are in their mid-20s. Females live in separate rooms and some of them already gave birth there. They were impregnated at the centre,” he added.

While speaking with the press during the operation at Oloore Mosque on Monday, the Oyo State Commissioner of Police quoted the escapee who tipped the police off as saying that the victims were “being treated like slaves and engaged in forced labour; and oftentimes, their deaths were not reported to anybody.”

Abayomi told Saturday PUNCH that four of his peers died during his two-month stay at the facility and that inmates were being subjected to hard labour.

He said, “Four people died while I was there. One of them was my friend and roommate, Wahab. He was sick and they didn’t allow his parents to take him away. He battled malaria for weeks without being treated. It was only paracetamol that they gave him.

“He died at night inside the room. He was from Ijebu-Ode. He was a tall and slim young man. They called his parents to carry his corpse. There was also somewhere inside the compound where they buried bodies.”

He added, “We fetched water for the clerics and washed their clothes. If you were a new inmate, they would lock you up for one week. Throughout the time I was there, they didn’t teach me anything new in the Qur’an apart from what I had known before getting there.

“It is an offence for two persons to talk. If they catch us, they would accuse us of planning to escape and give us 40 strokes of cane. I was beaten several times for an offence as minor as making a noise.”

On the eve of the last Eid-Kabir celebration (August 12, 2019), Abayomi and other captives were hopeful that a reprieve would come their way the next day. Being a special day when food is usually surplus in many Muslim homes and meals dished out happily in the spirit of the season, the inmates expected sufficient food.

They realised it was a tall dream after all when the day came. “That was my saddest day at the camp,” Abayomi said with a burst of anger. “Everybody was expecting that at least they would give us enough food that day. But to my surprise, there was no difference from what we normally ate.

“They did not allow us to go for Eid prayer because they knew many people would run away.”

Abayomi’s mother, who gave her name only as Aduni, explained that a family friend recommended the centre to them when they got tired of their son’s recalcitrant behaviour.

She said, “They (the centre operators) charged us N150,000 the day we took him there and we were given a list of items he needed to bring, including clothes, foodstuffs, provisions mat, soap, toothpaste which I bought. We paid N50,000.

“I went there once or twice in a month to check on him. I later discovered that they made it look like an Arabic school. Most of the persons I saw that first day looked pale. I was worried and complained to the person that took us there but he assured me that my child would be safe. He said the school also took care of mentally-ill people.

“They told us that over 400 persons lived there. I also saw exotic cars of people who were on a visit. Two weeks after, I went to visit him and took some foodstuffs along. When I got there, I asked for my son unknown to me that he was among the people outside. He had changed. He looked lean and shabbily dressed. I asked him what was wrong but he did not say anything because one of the clerics was with us. Apart from the foodstuffs I took there, they collected N27,000 for his monthly feeding.”

Aduni explained further that when she visited her son a month after, she could not recognise him again, adding that she returned home sad.

She added, “I had to beg my husband on his behalf for him to come back home. By the time we brought him back home, neighbours could not recognise him again. He looked thin and emaciated.

“We paid N105,000 before they released him. They didn’t know we wanted to pick him that day. He was seriously sick when he got back home. I regretted my decision. I thank God he is becoming a changed person now with constant counselling.”

Condemning the act in the torture home, the Oyo State Governor, Mr Seyi Makinde, promised that structures at the centre would be demolished and rescued victims treated and rehabilitated.

He said, “What we have seen is something that we all have to condemn and this shouldn’t be happening in a modern environment. You can’t use a mosque as a façade to perpetrate this kind of evil. 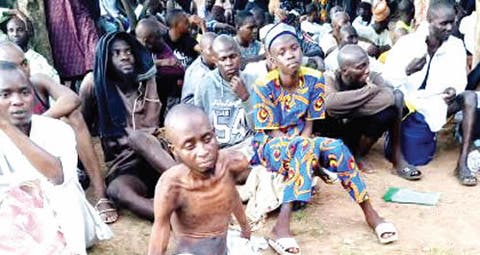 “We have marked the entire structure for demolition; we have here people from the state ministries of lands and urban planning, health and justice. The government will do everything that is humanly possible to ensure that this kind of thing is stamped out in our environment.

“But, there are houses around here; the people, if they see something, ideally, they should say something because this kind of thing could not have been going on without all of these people, particularly the residents around here, not knowing about it. They should have reported this thing to the authorities and maybe we would have unravelled this a long time ago.

“We will ensure that we take this place away from those people doing this kind of thing within the ambit of the law. Also, all those involved are going to be prosecuted.”

The Ibadan torture centre made it the sixth to be discovered in recent times after similar ones were discovered in Katsina, Kano, Kaduna (two Arabic schools) and a church in the Isheri area of Lagos State.