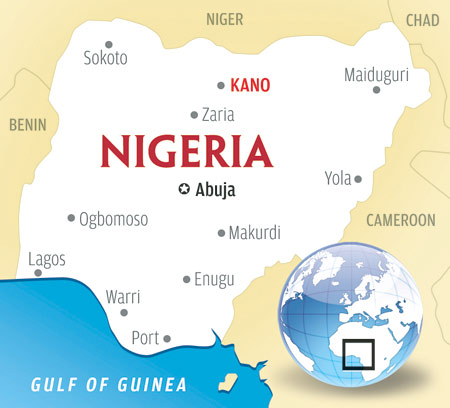 Violence has erupted in the ancient city of Kano, following the declaration of winner in the supplementary governorship election held on Saturday in the state.

The Independent Electoral Commission (INEC), had on Sunday night announced the incumbent governor, Dr Abdullahi Umar Ganduje, as of the governorship election in Kano State, thereby returning him for a second term in office.

However, violence broke out in the state Sunday night, as aggrieved people turned out in large numbers and were desperate to force their way into the state INEC office, but for the timely intervention of the police fired teargas to disperse the crowd of people, who had also positioned themselves in places around some the state INEC office.

The situation became worsened when Professor Bello Balla Shehu, the returning official for the collation of governorship rerun election, declared the governorship candidate the APC, Dr Abdullahi Umar Ganduje, as the winner of governorship election.

The teargas fired by the Police to prevent irate youths from gaining entrance into state INEC office made even the journalists, election observers and others to run helter sketter for dear lives.

However, feelers said the irate youths have taken most of major roads in Kano State, and subjecting resident to palpable fear and tension, as many residents of Ssbongari, an area very closed to INEC office, were forced indoors to avoid been attacked

As of the time of filing this report, it was not easy for journalists, observers and a large numbers of people to leave the INEC office to their respective destinations, while
many people may be forced to pass night at state INEC office, to avoid been attacked.

The Independent National Electoral Commission (INEC) had declared the incumbent governor of Kano State and candidate of the All Progressives Congress (APC), Dr Abdullahi Ganduje, as winner of the just concluded governorship re-run election in the state.

Declaring the winner of the election, the governorship election Collation Officer in Kano, Prof. Bello Shehu, said that the APC candidate garnered 1,033,695, while that of the Peoples Democratic Party (PDP), Alhaji Abba Kabir scored 1,024,713 votes.

He said that the APC candidate defeated the PDP candidate with 8,982 votes margin and therefore declared Ganduje the winner having satisfied requirements of the law by scoring the highest number of votes.

According to Shehu, the winner was declared after the collation of result from all the affected 28 local government areas where the supplementary elections was conducted on Saturday March 23.

He said Ganduje polled a total of 45,876 while Kabir of the PDP got 10,239 votes during the last Saturday’s supplementary elections in 28 local government areas of the state.

News Agency of Nigeria (NAN) recalled that the governorship election was earlier declared inconclusive following the high number of cancellation of votes as a result of violence and overvoting.

According to the collation officer, the total number of votes cancelled during the earlier election which led to the declaration of the poll as inconclusive was beyond the margin between the PDP candidate who was leading with 26,000 votes and that of the APC candidate.

NAN further recalled that the votes cancelled during the March 9 governorship election was 128,572 votes.

The PDP Chairman further described the election processes as shameful and called for the immediate cancellation of the exercise.

According to him, the party will not accept the result, therefore refused to sign it.