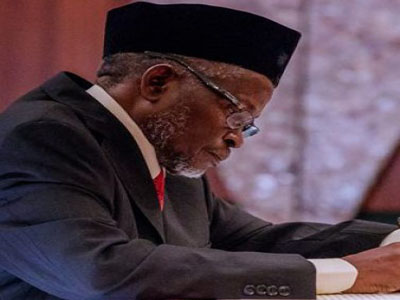 The Supreme Court operates independently and is never dictated to by anyone, Acting Chief Justice of Nigeria (CJN), Justice Ibrahim Muhammad, said yesterday.

He said: “We take our time in taking notes and writing judgments to avoid making mistakes. We subject every case before us to intense debates and arguments during our conferences in order to be as dispassionate and objective as possible.

‘’Let me state clearly that we are not answerable to anybody and can never be intimidated by anybody whatsoever in taking our decisions.

“But for certain, we are only answerable to God Almighty because he is the owner of our lives. No human being, living or dead can influence the reasoning or judgments of the Supreme Court of Nigeria.

“We are very independent in Supreme Court because of the enormity of the trust and responsibility reposed in us by the almighty God, the Constitution and our dear nation.”

Justice Muhammad spoke in Abuja when he hosted the management of the Asset Management Corporation of Nigeria (AMCON), who paid him a courtesy visit in his office.

He noted that the apex court remains the busiest and most hardworking Supreme Court in the world, in view of the number of appeals received and heard on weekly basis as well as the number of judgments delivered within short durations.

The CJN said: “I beat my chest to say that there is no Supreme Court in the world that works the way Supreme Court of Nigeria does.

“Except when we go on our annual vacation between late July and early September of every year, we keep hearing appeals. It is on record that there is no day of the week, between Monday and Friday that we don’t sit.

“We deliver judgments on Fridays. Sometimes, we give as much as 35 judgments on some Fridays. We often times over-stretch ourselves, as we work assiduously day in, day out.

“If you see the number of appeals that come to this court on a regular basis, it will shock you.

“Basically, as it is today, there is nothing we can do about it for now, except there is a Constitutional amendment. Ideally, it is not every case that is supposed to reach Supreme Court. Some ought to be terminating at the Court of Appeal.”

Muhammad assured that will always endeavour to bend over backwards, to give all cases involving both private individuals and other critical sectors expeditious hearing and attention, as part of its contribution to the nation’s economic development.

The AMCON chair further stated that additional N2.2 trillion was paid as financial accommodation for the then ailing banks.

He noted that the total current exposure as at April 30th, 2019, according to him, is N4.19 trillion, with an excess of 7,000 outstanding obligors.

Banire said: “Unfortunately, the top 350 obligors account for 82 per cent of the outstanding loans of N4.19 trillion, while just the top 100 made up 67 per cent.

Banire noted that the major handicap of the Corporation, he stated, is the delay tactics often employed by the defaulters to frustrate the cases currently pending in various courts across the country.

Other Justices of the Supreme Court at the event were Olukayode Ariwoola, Kekere-Ekun, Musa Dattijo, Ejembi Eko and Uwani Abba-A