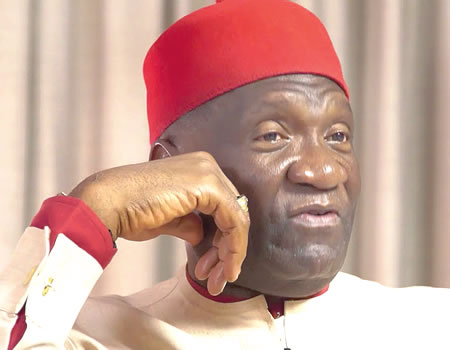 AS the nation eagerly waits for the inauguration of ninth National Assembly, come May 29, the main preoccupation of major stakeholders across all the geopolitical zones in the land, and which has become a major discussion in the public domain has been the quest for the principal offices in both the House of Representatives and the Senate.

While elected senators and members of the House of Representatives across the land are jostling for all the available offices in both chambers, investigation revealed that the office of the Speaker, which is the fourth highest position in the land after that of the president, vice president and Senate President, is the major project Ndigbo are working assiduously to realise in the ninth Assembly.

A larger segment of Ndigbo are miffed by the fact that, the people of the South-East zone had not occupied the post of the Speaker of the House of Representatives since the exit of Jaja Wachuku and Edwin Ume-Ezeoke in the First and Second Republics, respectively. To most of them, it is high time Ndigbo were fully reintegrated into the national politics, for the sake of equity and justice.

Several pressure groups and individuals have been pushing for the realisation of the goal, even as two names are in the front burner in the quest for Igbo speakership namely, Honourable Nkeiruka Onyejeocha and Honourable Chike Okafor. The former, who had served in various committees, including Women in Parliament, Appropriation, Works and INEC, Police Affairs and Aviation which she currently chairs since 2011 as a PDP lawmaker, was re-elected for the fourth time on the platform of the All Progressives Congress (APC).

The first among the pressure groups angling for the election of a Speaker of Igbo extraction in the yet-to-be inaugurated ninth House of Representatives is the Coalition of South-East Civil Society and Human Rights Organisation. According to the group, Honourable Onyejeocha, representing Isuikwuato/Umuneochi Federal Constituency, is fully equipped to handle the leadership of the lower chamber.

Addressing newsmen in Enugu recently, the spokesmen of the group, Dr Jasper, a lecturer at the University of Nigeria, Nsukka (UNN) and Comrade Ibuchukwu Ezike, Executive Director of the Civil Liberties Organisation (CLO), said, in line with the principle of federal character, the South-East geopolitical zone should be allowed to produce the Speaker this time around, noting that the zone has not produced one since the inception of the Fourth Republic in 1999.

They both noted that in the national tripod, the North-West has the president, while the South-West has the vice president, stressing that for equity, justice and fair-play, the South-East should be given the opportunity to produce the next Speaker of the House of Representatives.

To justify their assertion of the Igbo claim to the leadership of the lower chamber, both Jasper and Ezike averred that the All Progressives Congress (APC) had made inroad to the South-East, pointing out that Abia State where Onyejeocha hails from, gave the needed 25 per cent votes to President Muhammadu Buhari in the February 23 presidential election.

“To douse tension and assuage the feelings of exclusion and marginalisation as well as changing the perception of Mr President in the South-East, the next Speaker of the House of Representatives should come from the Igbo enclave.

Another interest group championing the Honourable Onyejeocha-for-Speaker cause is the Conference of State Publicity Secretaries of the All Progressives Congress (APC), South-East Zone. The group, led by the Anambra State publicity secretary of APC, Okelo Maduike, re-echoed, “based on equity, justice and federal character, the South-East geopolitical zone should be allowed to produce the Speaker for the lower house. The zone has not produced a Speaker of the House of Representatives since the inception of the Fourth Republic in 1999.”

Maduike further said, “It is our considered view that the South-West geopolitical zone cannot take the office of vice president and Speaker, the North-East, Senate Presidency and Secretary to the Federal Government, while the South-East goes home whipped and weeping.

“It is needless to restate that with over 40 per cent upping of statistics on who won National Assembly seats, the South-East is the most improved zone, by comparative performance of 2015 and 2019. It, therefore, stands to reason that a presiding officer position in the National Assembly will set the balancing tone for inclusive.

“For the avoidance of doubt, the 2019 election into the National Assembly is a different ballot from the presidential polls. Yet the South-East recorded an improvement in both. We remain loyal and committed to APC and its noble cause of creating viable, valuable and desirable change in the politics of Nigeria and hold that such must eschew brazen exclusion.”

In the same vein, another Igbo group, Southeast APC Progressives Forum (SEAYPE), also preached the gospel of equity as it declared that either Onyejeoch or Okafor should be allowed to take over the number one position in the House of Representatives in the next dispensation. The group noted that the two federal lawmakers and former Governor Orji Uzor Kalu (who it endorsed for the post of the deputy president of the Senate) had all devoted their energies to promoting the APC cause.

“The result of their commitment is the APC wining senatorial, House of Representatives and House of Assembly seats for the first time in a state where APC is likened to a Christian living in an ISIS dominated area. Apart from their unassuming commitment to the reintegration of the Southeast into Nigeria’s mainstream politics through the APC, these Nigerians have equally proved themselves as outstanding and detribalized Nigerians,” it said.

However, there seems to be a discordant tune in Igboland over who becomes the next Speaker of the House of Representatives, with the Director-General of the Voice of Nigeria (VON), Osita Okechukwu, leading the pack of dissenting voices to having a Speaker of Igbo extraction. Okechukwu, an APC chieftain, recently called on Nigerians, particularly the political elite across the country to support both Senator Ahmed Lawan and Honourable Femi Gbajabiamila to become the Senate President and Speaker of the ninth National Assembly, respectively.

The VON Director General, while speaking at a recent social event held in Nkerifi in Nkanu- East Local Government Area of Enugu State, said: “My honest opinion, is let Lawan and Gbajabiamila be. Without prejudice to the zoning convention, Senator Ahmed Lawan and Honorable Femi Gbajabiamila have paid their dues in the progressive camp. They have been consistent, steadfast and had persevered in the struggle which made our victory possible. They are our arrowhead in the National Assembly. I am a witness.”

When told that some senators, including Ali Ndume (a contender for the seat of the Senate President), had complained that the method adopted by the APC national chairman, Adams Oshiomhole, towards picking the leaders of the ninth National Assembly lacked finesse and was undemocratic, Okechukwu said: “May I use this golden opportunity to appeal to my dear friend, Senator Ali Ndume, my big brother Senator Orji Uzo Kalu and indeed distinguished senators and honourable members of all the political parties to support President Muhammadu Buhari in his last leg by allowing his proposal, as per the leadership of the National Assembly, to stand.

“Please leave Comrade Chair’s [Oshiomhole] political correctness out of the equation for, in the fullness of time, the regime will be remembered as Buhari’s regime, not Oshiomhole’s regime. Any day any time, one is an avid supporter of robust legislature. That is why I support the independence of State Houses of Assembly. Luckily Buhari has placed independence of state Houses of Assembly on the front burner.”In spite of all the positions taken, the question is, ‘Would the South-East succeed in pushing Onyejeocha or Okafor to the exalted position of the Speaker?’ If Onyejeocha triumphs, she will be the second female Speaker of the House of Representatives after Honourable Patricia Olubunmi Etteh of the PDP from Osun State who was unanimously elected Speaker after inauguration of the House on June 6, 2007.