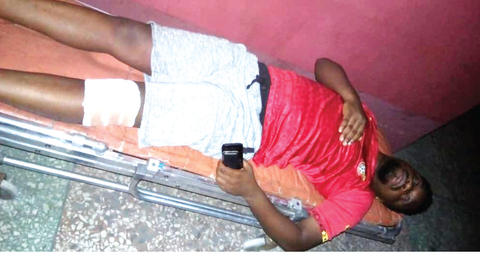 A journalist with Port Harcourt-based Nigeria Info radio station, Kofi Bartels, is currently recuperating in hospital after being allegedly tortured by personnel of the Special Anti-Robbery Squad in Rivers State.

Bartels said he suffered a swollen knee after he was hit several times with wooden bars by the policemen during an incident at Mgbuoba in the Obio/Akpo Local Government Area of the state.

He explained that trouble started on Tuesday when he noticed that the SARS personnel wanted to arrest a boy, whose mother was selling bean cake (akara) along the road.

Bartels told Southern City News through a text message, “I drove out of my compound to see them trying to arrest a boy, who lives in the area. His mum fries akara for a living. I went to plead with them, but hesitated at a point and chose to take a shot of their bus and the number plate.

“I was given the beating of my life. Right on the road, they started by smashing my knees with wooden bars. My left knee is swollen and my right knee is seriously bruised.”

The presenter with Nigeria Info, Port Harcourt, explained that the policemen took him to their base, where he was thoroughly beaten.

He added, “I was beaten mercilessly at the SARS headquarters when we got there. They took turns to slap, punch and kick me all over by at least six officers. One swore that he would have wasted me if his team was the one that picked me up.

“A couple of them told me to watch my back, saying that was my end in Rivers State due to the human rights issues we treat (on radio) involving SARS and the police generally. It is unfortunate that innocent boys are being picked up for ransom by the SARS in Rivers State almost daily.”

Reacting to the development, a rights group, the Institute of Human Rights and Humanitarian Law, described the SARS personnel as the most odious specie of law enforcement agents in the country.

A statement by the acting Director of the group, Wenenda King, read in part, “Kofi Bartels was beaten, manhandled, handcuffed like a common criminal, thrown into a bus and bundled to the SARS torture chambers at Rukpokwu Town, where the inhuman and degrading treatment continued unabated.

“It took the intervention of an ex-commander of SARS, when the news sipped out, for Kofi to know and see freedom. It could probably have been his end, but for his personality. The IHRHL unequivocally condemns this odious treatment of a citizen.

“This is happening less than two days after the President of the Federal Republic, in response to a recent report by the National Human Rights Commission, openly vowed that the rights of citizens must be respected and protected under the rule of law.

“The Inspector-General of Police was present and added his voice to the absolute requirements for citizens to be treated within the bounds of the UN minimum standards for law enforcement officer.

The group advised that the SARS must not be allowed to become a mighty fabric of human bondage in Rivers State and Nigeria.

“It is our prayer in this darkest hour of law enforcement disposition that our responsible political leaders must not look on with icy coldness and remain unmoved in the face of the perils and calamities, which the bad eggs in SARS are visiting on unsuspecting citizens of the realm,” the group added.

However, the Head of Station, Nigeria Info, Port Harcourt, Blessing Olomu,told our correspondent that the organisation had been informed by the state police command that the offending SARS officials had been arrested.

Efforts made to reach the state Police Public Relations Officer, Nnamdi Omoni, to react to the incident proved abortive as several calls to his mobile phone were not answered.