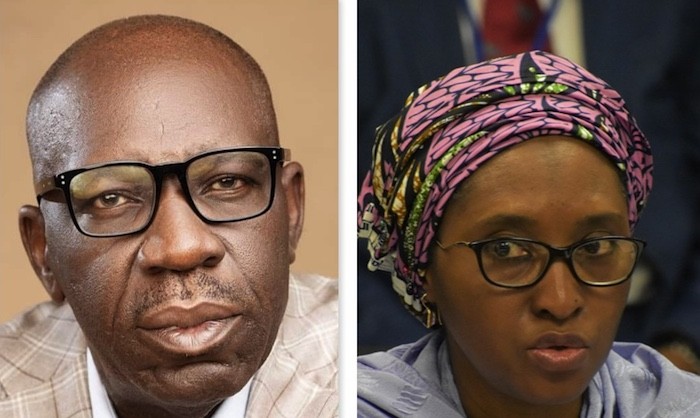 The event of April 7, 2021 will never be forgotten in a hurry in the memory of those who think about the progress of the country and those who believe in speaking truth to power in Nigeria.

It was the day Governor Godwin Obaseki of Edo State took the bold step to raise the alarm on the financial trouble confronting the country.

Obaseki, during a meeting with the transition committee members at Government House in Benin City, the Edo State capital, said Nigeria was in huge financial trouble for allegedly printing money to fund shortfalls in allocations shared to states.

He also expressed worry over the nation’s penchant for borrowing, noting that the debt profile could rise to N16trillion by the end of 2021.

The governor, while lamenting the shortcomings, claimed that the Federal Government printed additional N50billion to N60billion to top up the Federal Accounts Allocation Committee (FAAC) for states to share.

“In another year or so, where will we find this money that we go to Abuja to share every month? Last month, we got FAAC for March; the Federal Government printed an additional N50 to N60 billion to top-up for us to share.

“We say remove subsidy, they say no. This April, next week again, we will go to Abuja and share. By the end of this year, the total borrowing is going to be in excess of N15 to N16 trillion.

“My worry is that we will wake up one day like Argentina, the naira will be N1,000, N2,000 and will be moving because we don’t have money coming in. You are just borrowing, borrowing and borrowing without any means or idea of how to pay back,” he said.

The wake-up call has not gone down well with the powers that be, especially the Federal Government because it has placed those in authority in close watch and eroded confidence reposed in them by the citizenry.

Since the drama unfolded a week ago, there have been reply and counter-response between the Federal Government and the Edo State government.

Zainab Ahmed, minister of finance, budget and national planning, however refuted the allegations, saying it was untrue that the FG printed N60 billion in March to support federal allocations to states.

Ahmed, at a briefing after the Federal Executive Council (FEC), explained that monies distributed at the monthly FAAC meetings were generated revenue from government institutions available to the public at the ministry’s website.

“The issue that was raised by the Edo State governor, for me, is very, very sad because it is not a fact. What we distribute at FAAC is revenue that is generated and in fact distribution revenue is public information,” she said.

Ahmed said her ministry publishes revenues generated by Federal Inland Revenue Services (FIRS), the Nigeria Customs Service and the Nigerian National Petroleum Commission (NNPC) are what is distributed at FAAC.

“On the issue of borrowing, the Nigerian debt is still within a sustainable limit. What we need to do, as I have said several times, is to recoup our revenue to enhance our capacity to service not only our debt but to service the needs of running government on a day to day basis.

“So, our debt currently at about 23 percent to GDP is at a very sustainable level, if you look at all the reports that you see from multilateral institutions,” the minister said.

But responding through a tweet on Thursday, last week, Obaseki, who refused to withdraw his claim, urged the minister of finance, budget and national planning to rally Nigerians to stem the obvious fiscal decline confronting the nation.

The governor also urged the FG to stop the act of deliberately ignoring the prevailing economic challenges in the country and take urgent steps to end the current financial rascality.

Obaseki, in a tweet via his official Twitter handle @Governor Obaseki titled “Our advice is that we stop playing the ostrich”, noted that he is not joining issues with the Federal Ministry of Finance but was only offering useful advice for the benefit of Nigeria.

“We believe it is our duty to offer useful advice for the benefit of our country. Rather than play the ostrich, we urge the government to take urgent steps to end the current monetary rascality, so as to prevent the prevailing economic challenge from degenerating further.

“We believe it is imperative to approach the Nigerian project with all sense of responsibility and commitments and not play to the gallery because ultimately, time shall be the judge of us all,” Obaseki said.

The prolonged public disagreement between the two governments have generated some reactions among citizens who have expressed divergent views that the federal government’s explanation seems to be more plausible and that the governor’s observation isn’t far from the truth over the rate at which the nation continue to incur debts.

“As an economist, I know that the financing of government programmes such as budget deficit is not done on the basis of instructions to Central Bank to print money or that there is shortage of fund in the federation account for the tiers of government to share and then the President will just direct CBN to print money and give to them. It is not done”, says Mike Obadan, a non-executive director of the Central Bank of Nigeria (CBN).

Obadan, a professor of Economics, said the Federal Government cannot direct the CBN to print money and share it among the state governments but the CBN can assist the different tiers of government in the context of its last function as a lender of last resort to government.

“I don’t think it is feasible in theory and in practice. Otherwise, the implication of that if the CBN were to be printing money anytime we are in shortage, then there will be too much money in circulation and that means there will be limited quantity of goods available and it will jack up inflation to hyperinflation level, which is not desirable.

“I think the monetary authority is a very responsible authority and cognisant of that fact not to overflow the economy with liquidity that will create more pain to the Nigerian people through erosion of purchasing power by high inflation,” Obadan added.

Abolo likened the situation to when Obafemi Awolowo told Shehu Shagari that Nigeria was broke “but Shagari said it was an alarmist cry, thereafter the prediction of Awolowo came through.

“They can deny as much as they want. Would a Governor just make a cavalier statement without a sense of implication or of truth?”Abolo said

“We live in a country where people prefer to feed their stomach than admit the truth. We run a country where there is neither transparency nor accountability, but a time will come when the truth will confront us,” he added.

Another analyst, who spoke to BusinessDay said it was naïve of anybody to think that the Federal Government would own up to what Governor Obaseki has said.

“The current government has been opaque in almost everything they do. How many things that go on in government do Nigerians know? Whenever questions are asked, what do they tell Nigerians? The President travels to London to spend the tax payers’ money on his health, yet when questions are asked on that they say it does not concern anybody. So, nobody should expect a government to say anything different from what they are saying,” the analyst said.