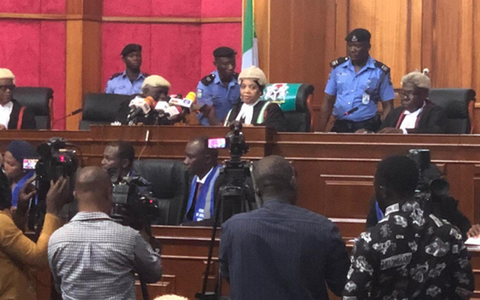 The Presidential Election Petition Tribunal in Abuja has stood down the Wednesday’s pre-hearing session on the petition filed by the Peoples Democratic Party and its presidential candidate in the February 23 poll, Alhaji Atiku Abubakar.

The Justice Zainab Bulkachuwa-led five-man bench of the tribunal stood down the matter shortly after lawyers appearing in the case announced appearance on Wednesday.

The tribunal stood down the matter following the request by the petitioners’ legal team for a meeting of the panel members with the lawyers appearing for the various parties inside chambers.

Dr. Livy Uzoukwu (SAN) leading the petitioners’ team, made the request on behalf of his team.

He noted that he had earlier before the Wednesday’s sitting began, informed the legal teams of the respondents of his intention to call for the meeting with the tribunal members.

But he did not disclose the purpose of the meeting.

The lawyers representing the respondents – the Independent National Electoral Commission, President Muhammadu Buhari, and the All Progressives Congress – did not oppose the request for the meeting.

After a brief conversation between the bench and the bar, it was agreed that each of the parties to the petition would present two lawyers each to meet with the Justices in chambers.

Atiku and the PDP would also be represented at the meeting by two lawyers each.

This makes a total of 10 lawyers that would attend the meeting.

At 10.49am, more than 20 minutes after the panel members had risen to prepare for the meeting, a court official announced that the meeting was going to hold at the President of the Court of Appeal’s Conference Room.

The selected lawyers were leaving for the venue of the meeting as of the time of filing this report.

With Justice Bulkachuwa presiding over the five-man panel, shows that she might have overlooked the PDP’s petition asking her to withdraw as a member of the panel.

There is a heavy presence of security men within and around the Court of Appeal in Abuja, venue of the Presidential Election Petition Tribunal, on Wednesday.

The security personnel comprising mainly men of the Nigeria Police and the Nigerian Security and Civil Defence Corps mounted roadblocks at both ends of the stretch of the road passing in front of the court.