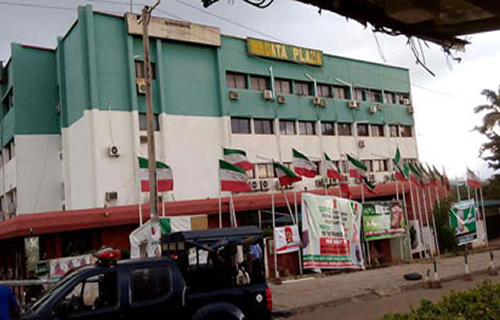 With only two days to the presidential election, the Peoples Democratic Party (PDP) said it has taken measures to ensure that it was not rigged out in the election.
The PDP said it has launched a nationwide hotline for the public to report malpractice as well as a national network of fully equipped Situation Rooms and call centers.

Chairman of Strategy Committee of the Presidential Campaign, Osita Chidoka, at a press conference yesterday, said no Nigerian political party has been so prepared to ensure that the will of the people prevailed through peaceful, free and fair elections, than the PDP.
That was just as the Director, Media and Publicity of the campaign organisation, Kola Ologbondiyan, disclosed that the party was deploying 40 million of its members and supporters to various polling units across the country.

Explaining further on the measures to track the votes, Chidoka said state-of-the-art Parallel Voting Tabulation (PVT) system has been put in place, adding that the PVT is a scientifically proven, best practice technique, to hold election authorities accountable, particularly when there is a lack of trust, and the results are highly contested.

“The PVT is a tool that will assure that PDP partisans accept the results of the election, and that the country remains peaceful and respectful of its differences. We are aware that other PVTs will be conducted by civil society.
“Our methodology accounts for several different scenarios to ensure continued collation of the results in the event of any disruptions with collation process.

“Hard copies of the signed voter tally provided to all party agents by the NEC officers, will be transported to the central command centre should future disputes need to be reconciled,” he added.
According to the former Aviation Minister, PDP has established a reporting system for the PVT through the wards, to the district headquarters, to the states to the national tally centre, adding that the system has redundancies built at all levels, in the event of Internet or communications shutdown or failure or any other eventualities.

“The scope of the effort is historic for Nigeria, and it will provide us with statistical certainty to accept or challenge the declared results.
“The PDP is deploying an unprecedented number of trained party agents to each of the 176,000 polling units across the country.

“PDP agents have been trained in the electoral process, understand their rights to be present, and have data and SMS technologies to report the results as they are certified by the INEC officers at the polling units in real-time.

“The PDP has pivoted from recruiting first-time polling agents to recruiting high quality, educated individuals whose maturity and experience will help them manage and mitigate against challenges on election day.
“Systems tests, and dry runs are being conducted to ensure our system is secure and fully integrated, from the polling unit all the way through to party leadership,” he said.

The nationwide hotline for the public to report malpractice, which was launched, according to Chidoka, is to provide multiple-line inbound call center linked to a single hotline number: 097 000 551 for voters to report any incidence of violence or electoral malpractice.
He expressed the fears that the All Progressives Congress (APC) ‘playbook’ in Osun where there were attempts at voter suppression and intimidation of voters, journalists, and civil society observers, could be repeated in Akwa Ibom, Bayelsa, Cross Rivers, Delta, Kaduna, Kano, and Rivers state.
Ologbondiyan also said PDP was ready for the election, noting that by all manifest indices from the six geo-political zones and 36 states of the country and Abuja, Atiku Abubakar, would win the Saturday’s presidential election.
He added that despite the concerns raised, PDP was resolute to win the election.

“The PDP acknowledges the fact that for Nigerians, this election is not about politics, but about building our nation; it is not between the PDP and APC, but between Nigerian citizens and President Buhari, whose incompetent, vengeful, violent-prone, divisive and inherently corrupt administration has brought so much poverty, anguish and pain to our dear country.

“For Nigerians, this election is a choice between democracy and dictatorship; between justice and injustice, between prosperity and poverty; unity and polarity; peace and bloodletting; freedom and enslavement; progress and stagnation; creation of jobs and job losses, respect for territorial integrity and invasion; a choice between an in-charge President and a President by proxy.

“It is also between a candidate that will accept responsibility and a candidate that always engages in a blame game. It is a choice between a candidate that will turn our nation into a pariah state and a candidate that will make our nation a huge foreign investment destination for the benefit of the people.
“This is the reason Nigerians are willing to make any sacrifice in this election. The pelting of President Buhari at his Ogun State campaign rally says it all.
“We want to note that our party has fully mobilized over 40 million of our members and directed our supporters to stand shoulder to shoulder with Nigerians in all the polling centers across the federation in the overall determination to vehemently unleash full-scale resistance against President Buhari and APC’s rigging plans,” Ologbondiyan stated.