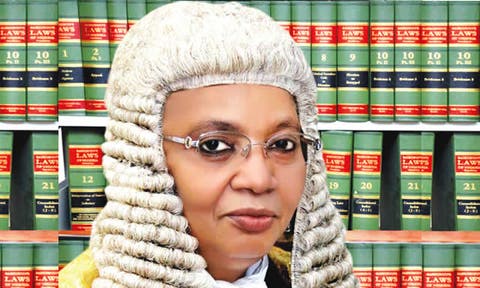 The Peoples Democratic Party on Thursday asked the President of the Court of Appeal, Justice Zainab Bulkachuwa, to withdraw as a member of the five-man panel of the Presidential Election Petitions Tribunal.

In a petition received in the Court of Appeal’s President’s office in Abuja, on Thursday, the party alleged that as the chairman of the five-man panel, Bulkachuwa would likely be biased in the handling of the tribunal’s proceedings because of her ties to family members belonging to the All Progressives Congress.

The party, in the petition which was signed by its National Chairman, Uche Secondus, and its  National Secretary, Umaru Tsauri, specifically said Bulkachuwa’s husband, Adamu Bulkachuwa, contested and won the Bauchi North Senatorial District election on the platform of the APC during the February 23, 2019 poll.

“We are reasoning that, armed with this golden rule of justice and fair hearing and given your direct intimacy, through your dear husband, with the APC, one of the parties in this election petition, Your Lordship, would have exercised your constitutional right and powers guardedly, judiciously and judicially, by excluding yourself from the panel of this honourable court’s sitting over this particular petition,” the party stated.

The party also complained that Bulkachuwa could have, by a comment she made during the inaugural sitting of the tribunal on Wednesday, prejudged its petition challenging the outcome of the February 23, 2019 presidential election.

It stated that Bulkachuwa’s claim in her speech to the effect that there would always be complaints no matter how an election was well-conducted, had “rocked” its confidence in the panel led by her.

It stated, “Furthermore, My Lord, in your address at the opening of the pre-hearing, you made some remarks that were both frightening and heartwarming. For instance in your opening paragraph you said: ‘Elections are held in Nigeria every four years into elective positions. No matter how well the election is conducted, there are bound to be complaints…’

“This remark rocked our confidence in a panel led by Your Lordship to determine our fate in an election which could be one of the ones that were very well ‘conducted’ in Your Lordship’s opinion.

“The question then is how can a petitioner convince Your Lordship othewvise over an election, which in Your Lordship’s opinion, was very well ‘conducted’?

The PDP and its presidential candidate, Alhaji Atiku Abubakar, had jointly filed their petition before the tribunal to challenge the victory of President Muhammadu Buhari and his party, the APC, at the presidential poll which held on February 23, 2019.

The party’s petition is one of the four filed at the tribunal to challenge Buhari and APC’s victory at the poll.

The PDP said due to the intimacy Bulkachuwa had with APC through her husband and other family members, it was not expecting her to be part of the tribunal panel not to talk of her chairing it.

The party’s complaint read, “On March 7, 2019, when our ex parte application in Suit No. CA/A/P/EPT/1/2019 seeking the leave and the order of this honourable court for us to inspect polling materials in the custody of the 1st respondent (INEC) used for the election of February 23, 2019, came up, it was heard by a panel of this honourable court led by His Lordship, Hon. Justice Abdu Aboki. We did not complain as there was no reason for us to do so.

“However, we were totally nonplussed, jolted and extremely surprised today, May 8, 2019, when Your Lordship sat and presided over the five-man panel of the court which conducted the opening of the pre-hearing session in our petition.

“We were surprised that Your Lordship, could choose to be part of the panel talk less of presiding over the petition which is between our Party, the PDP and the APC, a party which members of your family, especially your dear husband, are very active members.

“My Lord, it is no more a secret, that your dear husband, Adamu Mohammed Bulkachuwa, contested the February 23, 2019 election for the position of a Senator in Bauchi North senatorial District and won same on the platform of the All Progressives Congress.

“This information is not just in the public domain but has dominated both public and private discussions to the extent that it has become a sore source, not just to members of our party, but to the generality of Nigerians because of your very unique and critical position as the President of the Court of Appeal, which is saddled with the sacred responsibility of hearing petitions arising from the presidential election.

“This fear was palpable enough just with you as the President of the Court of Appeal but has now been worsened and compounded by the discovery that you have decided to appoint yourself as the chairman of the panel to hear the petition.”

The party said it would be impossible for Bulkachuwa to convince any reasonable man that her husband never discussed the PDP’s petition, which he was interested in its outcome with her, throughout the period of the trial.

The party also quoted a portion of Bulkachuwa’s speech stating that “Justice demands that Judges who will sit in the panel of a tribunal be divested from all forms of bias”.

It noted that the only way Bulkachuwa could have “divested” herself of bias was to have exercised her “constitutional right and powers guardedly, judiciously and judicially, by excluding yourself from the panel” sitting over the petition.

It said, “This is the only way you could have divested yourself from all forms of bias and be seen to be fair, both to yourself, our party, that is contesting against your husband’s party in this petition, and indeed, all Nigerians, who are keenly interested in the just, transparently impartial and unbiased determination of this Petition over an election which outcome obviously did not respect their wishes as expressed through their votes.

“It is based on the above premises, therefore, that we are constrained to respectfully request your lordship to recuse yourself from presiding over and/or sitting as a member of the panel hearing the instant petition as it would be impossible for Your Lordship to convince any reasonable man that your dear husband never discussed this Petition, which he is patently interested in its outcome with you, throughout the trial.

“This is so because Justice must not only be done but it must be manifestly seen to be done.”

The tribunal had on Wednesday fixed May 15 for the commencement of the pre-hearing session on the PDP’s petition.

In its reaction, the APC alleged that the PDP interest was mainly to remain in the news and that it would not help it (the PDP) to achieve that.

While saying he would like to get a copy of the letter to know its content, the spokesman for the APC, Mallam Lanre Issa-Onilu, said the APC would not want to help the PDP to remain in the news .

He said the APC would only respond to issues raised by the PDP “when it is absolutely important.”

According to him, “I will like to see the letter to enable me to know if it is important for us to respond. The PDP interest is to remain in the news. We will not help them to achieve that.

“We will respond to them when it is absolutely necessary, otherwise we will just ignore them. So, that is just it.”