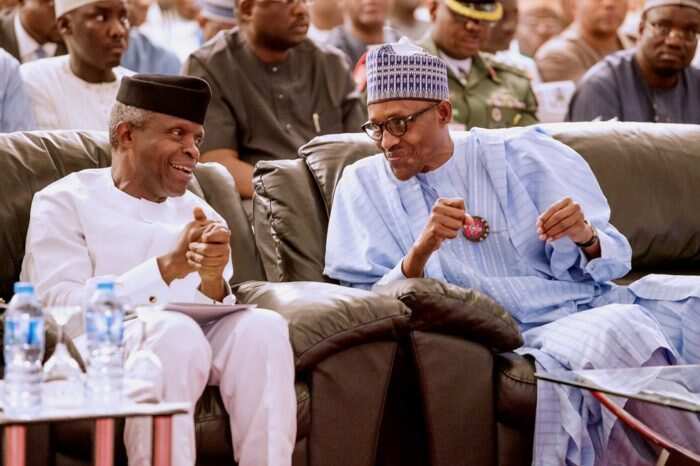 A former presidential aide, Umar Sani, has declared that Vice President Yemi Osinbajo has been relegated in Aso Rock

Sani, however, noted that Osinbajo might not function as VP again based on the power play going on in the presidency

Following the perceived lingering crisis between Vice President Yemi Osinbajo and President Muhammadu Buhari, a former presidential aide, Umar Sani, has said that the number two citizen might soon be stripped off of his constitutional duties.

In an exclusive interview with Legit.ng, Sani, who was a former senior special assistant to ex-vice president Namadi Sambo, said some of the events that unfolded in the last few days pointed to the fact that Osinbajo has been cowed by some powerful people in the Aso Villa.

He said the sudden removal of some of the statutory duties initially being carried out by Osinbajo and later removed was an indication that all is not well between the president and his deputy.

“There is no smoke without fire and there can’t be all these stringent measures without any reason. The vice president ab-initio was allowed to conduct his statutory duties without recourse to Mr. President and all of a sudden he was requested to observe due process through an internal memo requesting him to seek approval for all his actions.

“The special investigation panel on the recovery of public assets which was under the VP’s office was dissolved and taken away from him and the duties reassigned to the ministry of humanitarian affairs, disaster management and social development. The event by the Oni of Ife where the minister of interior had to represent Mr President in a programme where the VP is there in person in his own capacity speaks volumes,” he said.

The former presidential aide also noted that the fact that a bill was taken to the United Kingdom for the president’s assent and an approval obtained to dismiss 35 staff in the office of the VP all attested to two things – “there will no longer be an acting president neither will there be any representation at any public function by the VP. “

He said: “The reduction in his office staff strength simply means no additional duties will be assigned to him. Therefore, by this token, one can safely say the VP has been emasculated and is been relegated to the background. He has been reduced to functions only within the precincts of his office and left to conduct his official and statutory duties.”

Speaking on whether the north should retain in 2023, he said as a believer in rotational government he would like the leading parties to weight the opportunities and the threats and arrive at what would unite the country rather than what would divide it.

“It is not what I think that matters now but how the political parties intend to examine some of the complex issues bedeviling this nation. Whenever the issue of the national question is raised, the underlying context is to juxtapose it from the precepts of equal opportunities for all irrespective of regional,sectional, ethnic, linguistic or cultural backgrounds .

“Any person provided he is a citizen of Nigeria can aspire to become anything including aspiring to the highest office in the land and occupy same without prejudices. Though rotation is not a constitutional provision it behoves on us to examine our moral etiquette and do what is morally and collective right for the unity, sovereignty and well-being of our country.

“Will rotation be in our collective interest in 2023 or not , will our unity be threatened, are we going to be faced with more self determination issues? These are posers to the political parties to ponder upon,” he added.

On the possible political problem that might occur if the north retain the power in 2023, Sani stressed that both PDP and APC would not want to lose power but try to either retain it or wrestle it.

He said: “Our political or democratic agenda only recognizes electoral victory rather than institutional sustainability where democracy will thrive as a national consensus with a deliberately planned succession agenda rather than electoral conquest.

“As it is now both parties will not want to loose power and their computations and permutations for 2023 will be how to either retain power or wrestle it. 2023 in my view may not be different from 2019 be as it may. However, I will prefer to leave my fingers crossed as this opinion could be more of speculation than reality.”