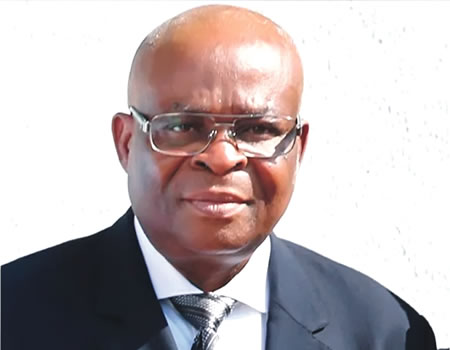 LOYALISTS of the retiring Chief Justice of Nigeria (CJN), Justice Walter Onnoghen who are within the judiciary, particularly at the Supreme Court, are reportedly spoiling for war, over the perceived conspiracy of the new leadership of the court, the Court of Appeal and the National Judicial Council (NJC) with the Federal Government, in frustrating the jurist out of the system.

Following his controversial suspension by President Muhammadu Buhari on January 15, Onnoghen finally tendered his notice of retirement Thursday night, hours after NJC ruled him morally-indicted and advised the president to compulsorily retire him.

His lead counsel in the legal battles arising from his travails, Chief Adegboyega Awomolo, a senior advocate, disclosed Saturday night that Onnoghen decided to voluntarily retire, due to his conviction that only NJC could sanction him.

He vehemently denied the resignation story that was everywhere in the public.

If Onnoghen had resigned his appointment as the CJN, he would have stayed on as a justice of the apex court, thereby creating an awkward situation for his junior, Mohammed Tanko, who has taken charge in acting capacity since Onnoghen was suspended.

Tanko was also recommended by NJC under the emergency leadership of Justice Umaru Abdullahi, a retired president of the Court of Appeal, to Buhari as a fit and proper person to take full charge as substantive CJN.

Sunday Tribune gathered that apart from the ethnic colouration that has tainted the Onnoghen saga, another dimension giving his own a major concern is the religious dimension.

In more than 30 years in the life of the apex court, Onnoghen is the second CJN of Christian faith, with the first being the late CJN, Justice Aloysius Katsina-Alu, from Benue State.

Incidentally, both faced major crises in office, with Katsina-Alu ending up becoming the first CJN in history not to be honoured with the usual retirement valedictory sitting.

He turned down the invitation of the then-succeeding leadership headed by equally-late CJN, Justice Dahiru Musdapher, to be honoured by the judiciary and the apex court, following his unhidden disappointment with the way his crisis-of-confidence with then-former PCA, Ayo Salami, was handled by his colleagues at the apex court and the NJC.

At the peak of the crisis, NJC had suspended Salami, with Musdapher playing a major role over the Sokoto governorship appeal judgement, only for the same Musdapher alongside Justice Maryam Aloma-Mukhtar and others, to reverse the suspension and advised then-President Goodluck Jonathan to reinstate the suspended jurist.

Though Salami was never brought back to office, a religious colouration came into the saga, when justices of the Supreme Court of a particular faith, reportedly began a solidarity attachment to Salami, despite being in the know and contributed to the decision by the Federal Judicial Service Commission (FJSC) and NJC, to recommend Salami’s promotion to the apex court, which he rejected.

Cases filed by Salami to challenge his suspension, also allegedly received sympathy from unexpected quarters within the top echelon of the system as well as the NJC probe and hearing in the petitions against both Katsina-Alu and Salami.

Infuriated by what seemed a majority/minority dichotomy and religious bias in the handling of the crisis, Katsina-Alu walked away from the judiciary when he clocked the age of 70 years on 28th August 2011, never to have anything to do with the system, till he died on 18th July 2018 at 76 years of age.

Before his press statement alleging bias against him by the Court of Appeal, which adjourned his five appeals for judgment without delivering any before he dropped his retirement notice, Onnoghen had told a close associate how deeply disappointed he was with his colleagues at the Supreme Court who heard his appeal and adjourned indefinitely for judgement.

With his ordeal, he is likely to walk away like Katsina-Alu, to become the second Christian CJN in history not to have the honourary valedictory sitting.

The sequence of events in the reign of the duo as heads of the judiciary has now become a major concern, with huge potential to shape how the apex court would emerge from the Onnoghen conundrum.

Beyond the justices’ level, senior administrative staff are also said to be divided over how Onnoghen’s reign came to an abrupt end.

One major issue attracting discussion and concern everywhere is the alleged roles played by the incumbent administrative head of the court, who Onnoghen incidentally appointed, but largely accused of working against him, even before he was suspended.

She was accused of collaborating with those seeking Onnoghen’s downfall, by allegedly providing vital information that got the jurist entangled.

“Even before oga was suspended, she was already having meetings with Justices of the court, working on oga’s ouster” a deep source in the system revealed.

Onnoghen’s sin was said to be the firing of her aides who were allegedly ravaging the system.

The said administrative officer was allegedly recommended to the exiting CJN by one of his very close aides, who had some academic background with the said officer, during their university days in the North, though the said aide is of South-South extraction like Onnoghen.

Meanwhile, the move in Kogi State by Governor Yahaya Bello to sack the state Chief Judge, Justice Nasir Ajana, over alleged misdemeanor, is putting a lot of pressure on NJC, Sunday Tribune can disclose.

Ajana’s unofficial sin is said to be his refusal to get Senator Dino Melaye, representing Kogi West Senatorial District, locked up during the just-concluded presidential and parliamentary elections, over an alleged criminal case preferred against him.

Dino of the Peoples Democratic Party went ahead to defeat Bello’s All Progressives Congress (APC) to win re-election to the senate.

The state House of Assembly has now recommended Ajana’s removal to Bello who is expected to seek NJC’s approval to fire Ajana.

If he didn’t before giving vent to the parliamentary resolution, the move would offend the decision of the Supreme Court in the case of the sacked former Chief Judge of Kwara State, Justice Raliat Elelu-Habeeb, who was reinstated by the apex court after she was fired by former Governor Bukola Saraki on the advice of the state assembly.

Findings by Sunday Tribune showed a prevalent disdain for the move to sack Ajana, within the NJC, but with the Onnoghen precedent, the council is now compelled to consider the governor’s request.

A lawyer, Erastus Aboluje, said “The suspended CJN Onnoghen has the right to resign and the resignation would take effect the moment the letter of resignation is received by President Buhari.

He explained that “The alleged recommendation by the National Judicial Council (NJC) that Justice Onnoghen be retired remains what it is, a recommendation, which has not been acted upon by the President.

“Again, it is a sad commentary that everything against Justice Onnoghen is in the realm of suspicion. The alleged recommendation by the NJC that Justice Onnoghen be retired is not formally in the public domain.

“NJC is known for publishing its findings and recommendations. This has not happened in this instance. The alleged resignation of Justice Onnoghen is not formally in the public domain. These are no good signs for an open and democratic society.”

Also reacting, a Senior lawyer,  Mr Oluwole Kehinde, said President has succeeded in giving Onnoghen a bad name in order to hang him by charging him before CCT.

“The point many fair-minded people made is that the President ought to await the recommendation of the NJC before proceeding against him.  Invariably, the President succeeded in giving the man a bad name in order to hang him, by charging him before CCT and suspending him illegally.”

The Sokoto State chapter of Peoples Democratic Party (PDP), has berated President Muhammadu Buhari and the All Progressives Congress (APC), over the purported resignation of Justice Onnoghen.

Speaking with Sunday Tribune, the Secretary of the party in the state, Alhaji Kabiru Aliyu, described the development as part of the conspiracy of the presidency and the APC.