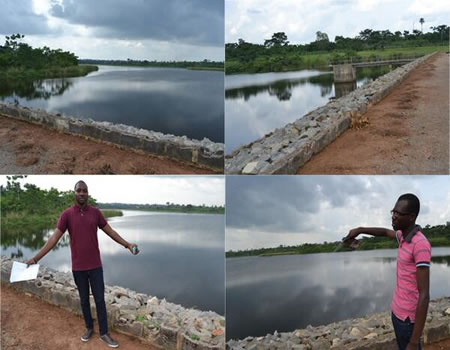 The management of the Obafemi Awolowo University (OAU), Ile-Ife, on Wednesday, described the poisoning of the university’s dam by suspected hoodlums as an act of genocide against members of the institution. Some aggrieved ‘indigenes’ of Ile-Ife, claiming ownership of some portions of the university land, had reportedly invaded the university and poisoned the institution’s dam on April 3. While conducting journalists round the dam within the institution’s premises, the university’s Public Relations Officer, Mr. Abiodun Olanrewaju, said the chemical used in poisoning the dam, the university’s only source of water, killed all the aquatic animals in it, adding however that it had been treated and was now safe to drink. He said: “The act is condemnable and wicked. How can a group of people poison the only source of the dam where the over 36,000-strong university population is drinking from? The act is genocidal and wicked. They came through the Parakin area of the town to poison the dam but God was so good to us that immediately the dam was poisoned, rain fell for two days, which washed the poisonous chemical away. We have treated the water and laboratory test has been done on it and now it is very safe to drink.”

The 162-hectare land was given to the university in the 60s by the then Ooni of Ife, Oba Adesoji Aderemi. However, recently, some landgrabbers reportedly started selling some portions of the land to people, chasing construction workers on the site of the proposed OAU International Secondary School away with cutlasses and other weapons. Worse still, three blocks of hostels built for students were abandoned following the incessant attacks by the hoodlums. According to the PRO, “For the safety of our children in the university, the vice chancellor instructed us not to allocate any of the 360-room newly built hostel to them. The vice chancellor has also instructed our security men not to retaliate but it is not possible for anyone to invade Federal Government land for personal gain because the land is gazetted. We have informed the police and other security agencies and we believe that they will act accordingly. We have also informed the Ooni of Ife, Oba Adeyeye Ogunwusi, and the Ife Development Board.”

To all intents and purposes, the poisoning of the OAU dam is symptomatic of the generally poor attitude to security issues in the country. It is galling that hoodlums in whatever guise were able to poison a dam serving such a large community as the Obafemi  Awolowo University. But for divine providence, a calamity of untold proportions would have befallen the university and the nation at large. If the utterances of the OAU spokesman are any indication, the university has adopted a cautious approach to tackling the existential threat that it faces. However, while we are not unaware of the fact that a harmonious relationship with members of the host community is crucial, we urge the university management to sit up and safeguard the lives of members of the community. If anything, this is not the appropriate time to say that anyone who is ready to use any portion of the land for the generality of the people and not for personal gain could approach the university for consideration. If for any reason the university is unable to properly utilize all of its land, it can enter into private partnerships with relevant bodies and harness the gains for its growth and development. Leaving the university land open to explorers as it were “for the good of the public” gives the impression that its territorial integrity  is open to question and this can only embolden the hoodlums launching attacks on it. Besides, we expect all portions of the university’s land to be fenced, with access to the university strictly within civilised and legal bounds.

From all indications, the said ‘landgrabbers’ are intent on wiping out members of the university community and causing mayhem in Ile-Ife. In that regard, it is unfortunate that up till now, the Osun State police command has not issued a statement on the attacks on the university. In a country where public institutions are the only means whereby the children and wards of the underprivileged populace can acquire education, the kind of sacrilege currently ongoing on the OAU campus should never be allowed to fester. That students cannot inhabit a hostel already completed because of security scares is saddening. Discretion being the better part of valour, the vice chancellor, Professor Eyitope Ogunbodede, actually did the right thing by postponing students’ occupation of the hostel until the university is able to guarantee their safety. In this connection, the point must be made that the university’s land belongs to the Federal Government and it is the Federal Government’s responsibility to ensure that it is safe and secure. Admittedly, though, there are increasingly no sacred spaces in the country anymore and a government which permits killer herdsmen to overrun its university campuses can hardly be trusted to tackle landgrabbers and other felons who encroach on the campuses. This is why we think that the multi-pronged approach adopted by the OAU management in addressing the current menace is appropriate, provided that it is willing to demonstrate greater resolve in keeping the community safe.

We urge the Federal Government and the Osun State government to address the security lapses within the OAU community now. The security agencies, in particular, must unmask the perpetrators of the crimes against the university and reveal their motivations. Are they just landgrabbers or are they members of more sinister groups like terrorists? Where are they sourcing their weapons from and do they have any sponsors? Apprehending the criminals and giving them the treatment recommended by the laws of the land will restore normalcy in the community.

It will also deter those intent on pursuing a similar course of action. If for any reason the attacks on the OAU community are allowed to fester, they may mutate into a tragedy quite beyond the country’s capacity. That must not be allowed to happen.

The post The poisoning of OAU dam appeared first on Tribune Online.