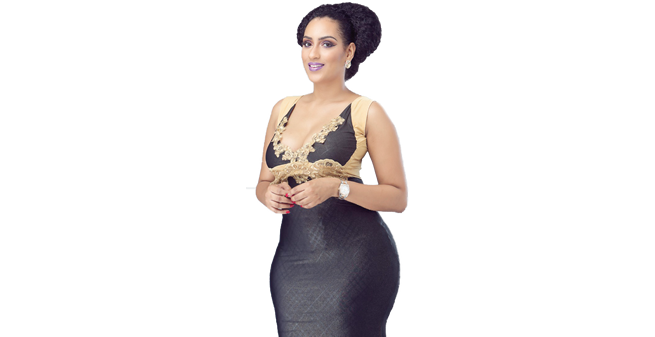 Screen goddess, Juliet Ibrahim is an award winning actress, film producer, singer, compere and humanitarian. She is also an adventurous, jovial, down to earth and bubbly person. She has nearly four million Instragram followers; making her great social media influencer. With several awards to show for this, the mother of one clinched the Celebrity Humanitarian Award of The Year and Fans Favorite Celebrity of The Year last year, a feat that further justifies her exceptionality. The celebrated Ghanaian actress reveals to VANESSA OKWARA her fun thoughts on Valentine’s Day and how great doors of success opened for her

Give us a brief background about you.

I was born March 3 in the 80’s. I was raised in Liberia, Ivory Coast, Ghana and Lebanon. I’m the eldest of three siblings: Sonia, Nabil and Nadia. I’m multilingual; I speak French, Spanish as well as English. After my pre-education in Lebanon, I had my senior high school education in Ivory Coast before returning to Ghana where I attended the Ghana Institute of Languages to perfect my French and Spanish after which I enrolled into the Ghana Institute of Journalism to read Marketing and Advertising.

When did you start your movie career?

I made my film debut in the movie, ‘Crime to Christ’ in 2007. I played my role so well with much passion and agility that I became the target of major film houses and had countless of offers from film producers and directors, especially from Nollywood and the Ghana film industry, Gallywood. Nollywood gradually became a homestead for me to continue to showcase my versatility from one movie set to the other. I have over 100 movie features to my credit. I was awarded in 2010 as the Best Lead Actress in a movie and several others after that. I launched into the celebrity world with a modeling career as a runway and editorial model; modelling for the big designers brands in Ghana, Nigeria and Ivory Coast and has also featured in countless commercials.

You are also a movie producer?

Yes, I produced my very first movie, ‘The Number One Fan’ in 2013. The movie which is still enjoying rave reviews has been premiered in Accra, Cape Coast and Lagos. My second movie, ‘Shattered Romance’ which parades Nigerian and Ghanaian actors, launched amidst fanfare in Ghana and in Nigeria in 2015. I have also shot a new Reality series; ‘Every Woman has a Story’, where I debuted my directorial skills.

You are a known philanthropist and humanitarian. How did it all start?

My love and compassion for people led me to set up the Juliet Ibrahim Foundation (JIF) which was launched in December 2011 to start an awareness campaign about cancer of the kidney. The JIF is aimed at helping Ghanaians, Nigerians and other West African citizens to know their status and prevent kidney

cancer from getting to the incurable stage. I’m also a strong advocate for the fight against Ebola, a cause I’m so bent on achieving and even have an audio and video awareness song on the killer virus.

You have also become an accomplished compere and event host. How did the breakthrough begin?

Yeah, I co-hosted the world famous CAF Awards in January 2016 where I spoke English and French, exhibiting the extent of the reach of football across the globe. I’ve hosted numerous other top class events such as the AFRIMMA Awards and Olamide in Concert ‘OLIC’, the Chronicles of Ushbebe, Shakara and the Gang Comedy Show, Glo Mega Music and Comedy tour across 27 cities in Nigeria as well as many other private functions.

For me, every stage is as important as the last one. I love giving my fans and event organisers a delight beyond expectation. I also believe that from the moment I got the opportunity to do the CAF Awards that I hosted for Glo, it opened great doors for me. It is God. If you are doing something right, you get referrals. So if someone checks you out on social media and you are good at what you do, they contact you.

How did you get your first breakthrough?

It started as a dream, tirelessly working from one set to another; filming over six movies in a month just to make a living. I recall how my immune system will break down and loved ones would ask ‘can’t you just take time off and rest?’

Just like every girl, I had a dream; I wanted to accomplish my resolution set out before I turned 30! In April 2015, I bought my first house as my 29th birthday gift. I’m extremely grateful to God Almighty who has allowed this nobody to be somebody! Many don’t know what being a refugee is like; literally I had nothing and had to start from scratch to get to where I’m today. This is just the beginning of many more blessings to come because whatever you believe you can achieve. Time and hard work makes a difference!

What does Valentine mean to you?

It’s a day that’s set aside to show the people in my life that I care and love them. This is not limited to a lover but my siblings, family, friends, and fans.

How are you celebrating this year’s Valentine?

I barely plan anything special on Valentine’s Day as I still work on the day unless it falls on a weekend then I’ll probably just take my family out for a special dinner and do something romantic for a lover when in a relationship. This year; unfortunately I’ll travel for work.

What’s the best Valentine gift you have ever received?

The best gift is yet to come.

Where is your favourite Valentine gateway?

My Favorite valentine getaway will be a trip for two to a romantic destination. Greece or Maldives would be ideal for me.

Do you believe love is blind? If Yes or No, please give your reasons

Yes, love is blind. That’s why when you’re in love with someone you don’t see the bad in them or what others see; you’re blinded by what you feel so you choose to ignore their flaws and all that others see except you. And this is why after love has gone sour you find some people asking, ‘did I really date him/her?’, ‘What was I thinking to have played the fool all along?’

That’s because they were blinded by love.

What’s your advice to youths, especially ladies this Val-entine?

Everyone has their belief of what Valentine signifies. So I’ll say; just spread love to everyone around you; you’ll be surprised how you’ll put smiles on a lot of people’s faces while at it. Don’t limit it to just your intimate loved ones.

What’s your take on love at first sight?

Which one is Valentine fashion style again? Anyways, I’ll definitely not be caught wearing red from head to toe.

I’m very adventurous with food but I’ll say I love pasta the most.

My favourite perfume brands will be Boadicea the Victorious, Le Labo, Creed, and Clive Christian among others.

Your birthday is coming up soon. Are you doing anything special to mark the day?

My birthday is on the 3rd of March and I’m organising a birthday hangout with my fans and colleagues in Pretoria, South Africa where we will stay for seven days and six nights having all fan packed activities together.

I wanted to do something on my birthday so that everybody can have the opportunity to come and explore with me in South Africa. So I did an open invitation. Some of my colleagues in the industry from Ghana and Nigeria like Sister Debby, Sonia Ibrahim, Beverly Osu and a whole lot will be together with me at the Maslow International Hotel in Time Square Pretoria.

I’m super excited to announce that some celebrities and friends have decided to join me on my Special Birthday trip to South Africa and you can also be a part of this fun and exciting getaway and many more to be revealed! I have travel agencies ready to assist you, so contact any of them on my social media handle to know what it takes to join me! I’ve got some exciting and really fun activities planned on this trip with me and my celebrity friends.

This is going to be a special trip; South Africa is such a fun place to relax and have a great time with family and friends. It will be so much fun meeting new people, exploring the city, enjoying the night life, shopping and sleeping in a luxury hotel.