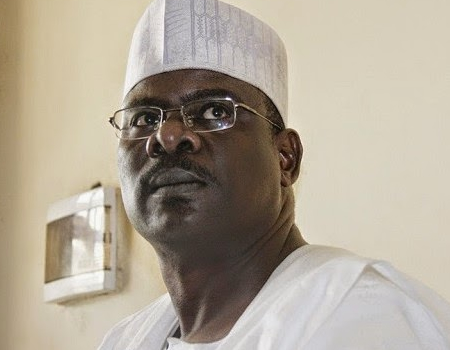 Did the adoption of Lawan as consensus candidate by the leadership of APC come to you as a surprise?

First of all, let me say that the decision by the party to settle for an individual instead of zoning the position to a particular geopolitical zone and also consulting or allowing the senators from that zone to decide who among them they prefer as Senate President, is a surprise. We were surprised on Monday night when the National Chairman of our party told us a decision had been taken to adopt Ahmad Lawan as candidate from the North East for the position of the President of the Senate. The reason why I am shocked and I am sure that is the feeling of my colleagues, is that, the constitutional provision for the emergence of the leadership of the Senate is clearly spelt out. Section 51 (a) of the Constitution says that “there shall be a Senate President and Deputy Senate President who shall be elected by members of the House. “

Section 1 of the Constitution the clearly states that “this Constitution is binding on all Nigerians and government agencies.” It went further to say that any other law that contravenes the provision of the Constitution is null and void. As a party that is supposed to be democratic and as a government that insists on allowing due process to prevail, this is strange. A candidate of APC normally emerges by one of three means, namely- consensus, indirect elections and direct primaries. As I said, such a decision was taken and we were not given the chance to ask questions.  We were not allowed to make comments.

The President made his remarks and after that, the national anthem was recited.  Even the chosen candidate was not given the chance to thank us or say something about it. Those of us that have indicated interests were not consulted or given the chance to make any comments. I left there with that shock, but I slept well notwithstanding.  I am one among equals. I am just one among 109 senators.  I am not better than them. I came back and slept well.  My wife and children were worried about my feelings.  I was even late for the prayers in the morning.

I try my best in everything I do and I leave the rest to God. I am now leaving this to God and those who elected me. I am going home to consult with elders who gathered themselves and asked me to contest. I will consult with them and then take a final decision.  The party has taken a decision.  I ultimately wait on the decision of Almighty God and to my colleagues. That is what I will say for now.

Explain what you mean by waiting on your colleagues to decide your fate, sir ?

You should not be confused. The constitution is clear. It says the Senate shall elect its president and deputy.  Like I said, my decision to contest for the position of the Senate President is not personal. Even my colleagues encouraged me to run. Not just the elected ones. They said I should vie for the position.  Even then, the party didn’t say it had elected Ahmad Lawan.  It only said it has nominated Lawan. The way the leadership of the National Assembly should emerge is clearly stated. Anything contrary to that means it is illegal and it can’t stand. As I said, we wait on God.

You said somewhere that if the party decides to impose someone on the National Assembly,  it will backfire and there will be crisis .  Are you standing by that claim?

I am not the one saying this. It is the decision of my colleagues.  I am one of those offering themselves to contest for the position.  I can’t even nominate myself.  Someone has to nominate and second me. I can’t say that a candidate has been imposed on us. The decision is now left for my colleagues.  If you look at the history of the National Assembly, such decisions have never gone down well.  In 1999, Evans Ewerem was imposed.  He didn’t last. Wabara was also imposed. He also didn’t last. After that, the PDP which we have accused of impunity didn’t do this. In 2007, the PDP showed wisdom by zoning the position to North Central.  That was what led to the contest between David Mark and George Akume. Because that happened, Mark served for two terms. Mark would have served for another term if PDP had won. He served his tenure peacefully.

Any leadership of the National Assembly that emerges through the support of members, it lasts. Patricia Etteh was imposed on us. She didn’t last.  Mulikat(Adeola-Akande) was supposed to be imposed on us. She wouldn’t have lasted. The House of Representatives rebelled against Gbajabiamila in 2015 and he was rejected.  The same thing happened to Lawan in the Senate. These things happened because of the way the party managed it. What happened on Monday night has showed that the party has not learnt anything.  Rather,  it has worsened it. My prayer is that,  the Senate should be what it is supposed to be – independent.

I feel pained that even in small places, you don’t impose leaders on children.  They have their natural way of choosing their own. In fact, in traditional institutions where kings emerge, they are elected. There are kingmakers. In our case, senators are the kingmakers. Who owns the loyalty on behalf of the beneficiaries? Is it senators or Adams  Oshiomhole? We were shocked, but God has the final say. In my religion, God says He is the one who knows to give power to. In Islam, God said He will give power to whoever He wills. God will make His decision.

Are you saying in clear terms that you will contest against the decision of your party?

I think the country needs a Senate President that that can lead. We need a president that will represent the interest of Nigerians.  Like you know,  zoning is not in the Constitution. The purpose of zoning is to enhance what the Constitution says, which is equity and justice in what the government does. That is why the party will say if the President is from the North West and his vice is from South West, the Senate President should come from the North East.

We are supposed to be given the chance to elect our president since it has been zoned. Allow senators from the North East to decide and consult on who they want. I wrote to the party that I wanted to run. I deserve that honour to be invited and told not to contest for the position.  I wasn’t given that honour . I was thinking that since Lawan has indicated his interest and Goje is also indicating his interest, as well as Adamu Abdullahi, we were supposed to be consulted. We deserve that respect and honour . They will say yes, you are qualified to be Senate President, but for some reasons,  this person should be supported.

Alternatively, you can tell us to contest and get back. You tell the four of us to sit down and decide on who we want.  That is better. The President emerged through a democratic process.  When the position was zoned to the North, he reluctantly contested. Kwakwanso, Atiku and others wanted to contest.  But because zoning doesn’t matter,  Okorocha contested. Buhari emerged as our candidate. Other candidates worked for his victory. In his second term, he contested for the presidency even as an incumbent.

Other people bought forms and they were not denied. Even after he turned out to be a consensus candidate, we still went to polling units. We came to Abuja to affirm his candidacy.  Mr. President had to submit himself to the electorate to emerge. Mr. President went to every state to campaign. The votes we gave to the President during the affirmation turned out to be almost the same votes he got during the elections.

I am not desperate.  I remain committed to the ideals and principles of President Muhammadu Buhari because he has been my mentor.  I don’t have a godfather, but I am a party loyalist. When I was elected as Senate Leader, when the Senate President wanted to do some things to the President,  I stood against that. I lost my position as Senate Leader.  I raised an issue against Saraki’s Range Rover and Melaye’s certificate.  I was suspended. I moved against the Electoral Act which was not in the interest of my party.  I have been standing and I will continue to stand for what is right.

At the meeting, Oshiomhole just threw it to us that Lawan will be the Senate President. I don’t believe that it is the position of Mr. President.  Before I joined this race, I consulted with Mr. President.  He gave me the go ahead.  I consulted with Tinubu and he gave me the go ahead. That was immediately after the primaries, before the elections. I did that to avoid what happened in the past when Tinubu told me that I came late. I have respect for the President and Tinubu.  But I am 60 years old. I stand for truth and I do what is right.

Have you met with your colleagues over what happened on Monday night?

The post Any attempt to impose presiding officers on the 9th Senate will fail —Sen Ali Ndume appeared first on Tribune Online.