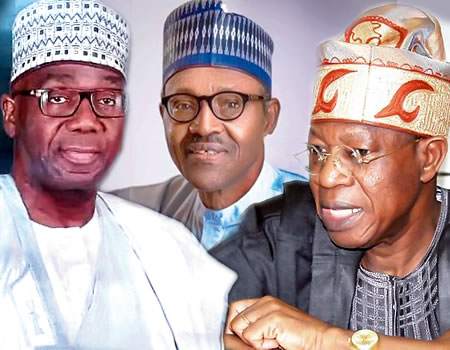 The intrigues and jostling are on the increase in Kwara State in the quest for ministerial appointments in the expected new cabinet of President Muhammadu Buhari. BIOLA AZEEZ writes.

TO all that worked in the electioneering leading towards eventual victory of the All Progressives Congress (APC) at all levels in Kwara State in the last general election, this is the time to reap their rewards for their contributions to the success of the party and its candidates in the elections.

Contrary to the thinking of some, the rewards for their individual and collective efforts in the just-concluded general election would not have come on a platter of gold as intrigues, scrambling and hustling for political positions have since commenced in earnest as politicians from the three senatorial districts of Kwara State are all out, trying to outsmart each other, as they engage in high-tech politicking to get what they believe should come to them.

While some political leaders in the state would say that there are laid down trends and tradition in selecting or distributing political positions in the state, some others are trying to use party structure and or party leadership to have their way in retaining or getting new federal appointments.

Sources claim that the present Minister of Information and Culture, Alhaji Lai Mohammed, from the Kwara South Senatorial District of the state, is planning to retain his position as minister, while some other party leaders, particularly from Kwara North Senatorial District, insist that it is their turn to produce a minister, more especially as they alleged that they had been out in the emerging political equation, judging by the outcome of the last elections.

As it is, the governorship slot has gone to Kwara Central Senatorial District, while the deputy governorship slot is  with the Kwara South. There is a raging battle among lawmakers-elect from Kwara South and Kwara North on who is supposed to be the Speaker of the ninth state House of Assembly.

The people of Kwara North Senatorial District are of the strong view that such political positions as minister, Speaker and the Secretary to the State Government (SSG) should come to them, adding that doing so would just be in line with the previous trend in allocating political positions in the state.

On the other hand, some APC elders from Kwara South Senatorial District have called for the zoning of the position of Speaker of the state House of Assembly to the northern part of the state in the interest of fairness and justice.

In a statement signed by the chairman of the Elders of Kwara South Senatorial District, Chief James Ayeni and made available to newsmen in Ilorin, the group said no ambition should be allowed to threaten unity of the state. He said it was only fair to concede the speakership slot to Kwara North since the remaining two districts of the state -Central and South- have each got the elective positions of the governor and the deputy governor, respectively.

“While people reserve the right to pursue their ambition, Kwara South Senatorial District elders believe that ambition must be tamed and must not be wild to the point of threatening our unity which is capable of truncating our focus on good governance and commitment to providing dividends of democracy to the good people of Kwara State who have been so marginalised for so long. We can better achieve this in the atmosphere of fairness, equity and justice”, the statement said.

They however called for support for the incoming administration, adding that, “while we must savour our hard-earned successes during the elections, we must not be complacent as it is not yet uhuru. The task ahead is humongous and requires total commitment in order to achieve our corporate objectives.”

Except, there is a new twist to the usual practice, Kwara State is expected to produce one substantive minister or a minister of state. However, the 12 governorship aspirants on the platform of the APC in the 2019 general election in the state, in view of their contributions to the success of the party in the election, are looking forward to being rewarded with a ministerial portfolio.

According to inside sources in Kwara APC, three of the former governorship aspirants stand a better chance than the rest in the quest for the single ministerial slot meant for the state. The three being tipped for such an appointment are Professor Abdulraheem, Mallam Mustapha and Alhaji Yaman.  This, the source disclosed to the Nigerian Tribune, is very certain.

However, against such likelihood is a possible return of the incumbent minister, Alhaji Lai Mohammed. Some APC leaders, especially, in Kwara Central Senatorial District, are not favourably disposed to the return of Alhaji Mohammed.

A source also said many members of the party from the senatorial district are not pleased with insinuation making the rounds in the state that the minister was behind the push from some quarters for the next Speaker of the state House of Assembly to come from Kwara South Senatorial District, where the Mohammed hails from. This move, the people believe, was meant to put the administration of the incoming governor in check by his favoured speakership contender.

However, another high ranking source in the party from Kwara South Senatorial District talked of the likelihood of the information minister retaining his position in the next cabinet, saying that he (Mohammed) has the ears of the party and President Muhammadu Buhari “being a Buhari person and judged by the political activities and programmes he has been put in charge to execute in the state.”

“Intrigues are high, I must tell you. It is 50-50 chances among all of them. While some are taking their own politicking on the matter from the state and national party structures, some others are employing the influence of the presidency, among other fronts,” he said.

One of the founding fathers of the party in the state who sought anonymity on the development also added his voice as he said “we are in a delicate period now. Until things take shape, one may need to tread with caution on such political discussions or issues.”

The party bigwig, however, urged the party leadership to choose a credible and the right person that would deliver the dividends of democracy to the people. “There are many aspirants and interests jostling for the ministerial slot. So, it behooves on the leadership of the party to choose right to avoid unpleasant consequences,” he said.

In one of the editions of its weekly radio programme, APC Gbode, the party leadership in the state urged all office seekers to allow for decorum and be patient in their angling for political positions. Confirming that its members had commenced scrambling for political positions in the incoming administration, it said the call became expedient so that activities of the ambitious politicians would not negatively affect governance negatively or put the party in disarray.