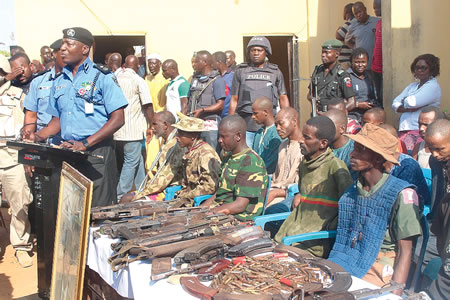 In a rather disturbing turn, the Acting Inspector General of Police Mohammad Adamu on Tuesday said about 1,071 persons died in crime-related incidents across the country in four months.

He said 767 of the persons killed, which represented 71.62 percent of the national rate, were from the northern region. The IGP said the released figures of victims were from January to April this year.

Speaking at the quarterly Northern Traditional Ruler’s Council meeting in Kaduna,‎ he said crimes statistics indicated that between January and April, no fewer than 685 persons were kidnapped across the country.

He said northwest recorded 436 cases of death, the highest in the country; north central, 250; south-south, 130 cases.

“Most of the murder cases recorded in the northern geopolitical zones are linked with armed banditry and communal violence. In relation to banditry, a total of 175 incidents were reported between January and April this year with Zamfara State recording the highest incident of 104, followed by Katsina State with 21 and Sokoto State with 19 cases,” the IGP said.

On incidents of kidnapping, IGP said 546 or 79.8 percent of the national total were recorded in the three northern geopolitical zones with the highest zonal prevalence occurring in the northwest where 365 persons were reportedly kidnapped within the period.

“This is followed by the Northcentral geopolitical zone where 145 persons were kidnapped. “It is pertinent to mention that Zamfara State has the highest national kidnap rate of 281 victims in what has been directly linked to activities of armed bandits in the state. This is followed by Kogi State with 65, Niger State 51 persons were kidnapped within the period,” he said.

The report by the acting IGP left a sour taste in the mouth of many. While the statistics released indicated a general atmosphere of insecurity, it is generally held that unreported cases of crime-related violence litter the country.

Last year, the National Publicity Secretary of Miango Youth Development Association in Plateau State, Comrade Zango Lawrence Nebanat, according to a media report, stated that within five months in 2018, 99 persons were killed, while 863 houses were burnt down by herdsmen in Irigwe Chiefdom of Miango Local Government Area of Plateau State.

According to him, the victims which included women, children and elderly people, suffered gunshots injuries, among other attacks.

Incidentally, these attacks are not limited to the North and Middle Belt, as the South-West has not been spared the violence.

In Ogun State, communities such as Ikotun, Ologiri, Akeru, Ilukan, Ijege and Ajibode, all under the Ketu Local Council Development Area (LCDA), in Ogun West senatorial district, under the aegis of Ketu Advancement Forum (KAF), in a statement entitled: Repeated Murder of Ketu People and Destruction of their Livelihood by Marauding Fulani Herdsmen, claimed that majority of the people had become prisoners in their homes, just as farmers had been chased away from their farms, while many schools, health services and economic activities had come to a standstill, following attacks by herdsmen.

According to the statement, the attacks began in October 2017, but got worse, when some persons were attacked with machetes on December 2017, in Moro and Eegelu villages for refusing to surrender to be raped.

In 2018, suspected herdsmen were said to be responsible for the deaths of three persons – two adults and a minor – in Ugboha, Esan South East Local Government Area of Edo State.

Aside these, about 12 persons were said to have been hospitalised at Benin Central Hospital and other private hospitals as a result of attacks by the herdsmen.

68-year-old Martha Ishaya, lost children and grandchildren toattacks by herdsmen. She lost three of her grandchildren when suspected herdsmen were said to have invaded Datanko village of Miango District of Bassa Local Government Area of Plateau State in 2018, on the same day President Muhammadu Buhari visited the state on a two-day working visit.

Incidentally, Ishaya, later discovered that two of her other children, Dauda Ishaya and Yahanna Ishaya, who had built their houses at Dundu village in Kwall Chiefdom of Miango Distinct, had died in a second onslaught.

Subsequent to the attack on Agbenema, a peaceful community in Omala Local Government Area of Kogi State by people said to be mercenaries reportedly working for herdsmen in the area, the Kogi State Government in 2018, offered N5million reward to anyone who could volunteer information on the perpetrators of the attack.

For members of the Arewa Youth Forum, the continued killings pose a major threat to the survival of the nation’s unity. In an interaction with Nigerian Tribune, president of the forum, Gambo Ibrahim Gugunju stated that “Clearly, the government has failed in providing security for its citizens. The government has only concentrated on tackling Boko Haram when there are many crises worse than Boko Haram going on. People are being killed in the northern part of the country.

“A lot of Christians protested across the country. It goes to show that the country is divided. We are afraid that the Christian/Muslim crisis may not quickly disappear. It is important that the state governments come together and see how to help the situation.”

We must find lasting peace—Nwabuokei, Peace and Conflict Analyst

Jude Nwabuokei, Peace and Conflict analyst, University of Ibadan, told Nigerian Tribune that the need to find lasting peace had become incumbent. “We cannot continue to pretend that all is well. All the conflict zones must be identified and we must resolve to find lasting peace. This must be done as soon as possible,” he warned.

In his assessment, Eric Omare, president of the Ijaw Youth Council, while interacting with the Nigerian Tribune, warned that should things continue the way they are, Nigerians may resort to civil disobedience.

“It will get to a situation when people will heed the call to defend themselves. Once that happens, it will lead to the breakdown of law and order. It will also lead to civil disobedience. Civil disobedience in the sense that since the army, DSS, police and other security apparatuses have failed, it will be difficult for Nigerians to obey their instructions. When people resort to defending themselves, they arm themselves and these weapons will invariably be employed whenever they like,” he said.

‘We can’t build Nigeria on bloodshed’

For Eric Oluwole, president of the Yoruba Youth Council, the killings “must stop forthwith. How can we talk about building a country on bloodshed? The president must rise to the occasion. We can’t continue like this. Look at the North, South, East and West. Nigeria has become a war zone. It is sad and it must stop.”

The post Insecurity: When will this tide be stemmed? appeared first on Tribune Online.