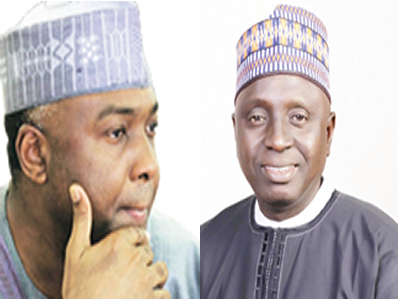 As Nigerians prepare for the Presidential and National As-sembly elections on February 16, the race for the Kwara Central Senatorial District will be the cynosure of all eyes as the Senate President, Dr. Bukola Saraki, will lock horns with Dr. Yahaya Oloriegbe, a political archrival of many years. Oloriegbe, a former Majority leader of the Kwara State House of Assembly, is contesting on the platform of the All Progressives Congress (APC) while Saraki is the Peoples Democratic Party (PDP) candidate. Oloriegbe, who has contested against Saraki twice (2011, 2015) and lost in the two instances, told newsmen in Lagos yesterday that Saraki has ceased to be the candidate to beat in his constituency and come February 16, the Senate President will be beaten ‘silly’ at the polls. But the Senate President has described the doomsday prophecy as a daydream. Saraki described Oloriegbe as one of the ‘seasonal or visiting’ politicians in Kwara State who have no political value. In the 2011 polls, Saraki, then of the PDP, garnered 78,799 votes to defeat Oloriegbe, then of the ACN who scored 53,058 votes.

In the 2015 election, Saraki, of the APC polled 118,879 votes against Oloriegbe of the PDP, who polled 66,884 votes. “I will like to let everyone know that in today’s Kwara, Bukola Saraki is no longer the candidate to beat. It’s daylight in our state of harmony and we have seen the light, no more Saraki dynasty control over the politics and affairs of the people of Kwara State,” he said. Oloriegbe’s campaign to oust Saraki had been hinged on several issues, among them allegation that the Senate President had spent the last 16 years deepening the poverty level in his constituency instead of alleviating same. Oloriegbe claimed that the level of socio-economic challenges across the communities in Kwara Central Senatorial District and, indeed the entire Kwara State, had reached alarming proportions.

His words: “Don’t be deceived, Saraki is finished politically. The dynasty’s palace is now without a roof and hiding place. We will beat Saraki silly, we will take back our state and the change is for real and it is now. “Never in the history of our dear state did we as a people stood up to a tyrant like this and the world over when a people rise up with the chant of change the tyrants and emperors tremble and run for cover.

That is what will happen in Kwara on the 16th February 2019. “I am Dr. Ibrahim Yahaya Oloriegbe, I have come to free the people of Kwara Central, I am one of my people, I am not a ruler, I am a servant leader, a man with a vision and a purpose and we want to give a voice to our people at the Senate for laws and policies that will change the political landscape and better the lives of our people. “In order to reverse the socio-economic slide of the past 16 years, Ilorin people need one of them. They deserve a leader who has deep and good understanding of its culture and value system, which defines us as a people.

They deserve representation and advocacy that is committed to the welfare and development of our communities; through collaboration and engagement with legislative and executive stakeholders at the federal, state and local government levels to ensure that our communities enjoy all democratic dividends and developmental opportunities that are due to us,” he said. However, Saraki dismissed Oloriegbe’s allegations of poor representation and poor performance as figments of imagination. Saraki, who spoke through his Special Adviser on Media, Yusuph Olaniyonu, said Oloriegbe was not yet an opponent in the race as he was yet to resolve the controversy surrounding his candidacy.

The Senate President urged the APC candidate to wait for the court to determine whether he will be a candidate in the election or not before challenging him. Oloriegbe, he said, remained only a factional candidate, but would be no match for Saraki even in the event of his being a candidate. “Oloriegbe is not a candidate in the senatorial election.

Rather, he is the candidate of a faction in the APC, the Bolarinwa faction, which the court, in a subsisting and unchallenged judgement, rejected and rather recognised the Balogun-Fulani faction. “Oloriegbe belongs to a group of people known in Kwara State as ‘seasonal or visiting’ politicians. The people do not see them. They don’t relate with the people.

They don’t help the people and their community until six months to election when they move in noxious money and they start printing posters. They have done this every election period. His present noise, as well as that of Abdulrahman Abdulrasaq, Lai Mohammed and the rest, is not different from what they have been doing since 2003.

The result will also not be different. “When Oloriegbe was in the House of Assembly, his candidacy was sponsored by late Dr. Olusola Saraki. So, his only electoral victory was on the wing of the Saraki dynasty. So, if he, like others, has the sole agenda to destroy that dynasty without promising the people any developmental agenda, then they have failed. “Look at his speech, he never promised the people anything good or developmental in nature. They only target Saraki. That ‘bring him down’ syndrome, empty envy, petty jealousy is not Islamic, not in synch with the true values of an Ilorin man. “Let me make it clear that the people are not with this group of seasonal politicians as represented by Oloriegbe. They are in the minority. They do not relate with the people. When they lose this election, they will return to Abuja, Lagos and come back in 2023. Kwara people have coined a counter-slogan against them. They call it “O Tun Ya” – Let Us Do It Again. Saraki is the one with Almighty Allah and his group is in the majority, insha Allah.”