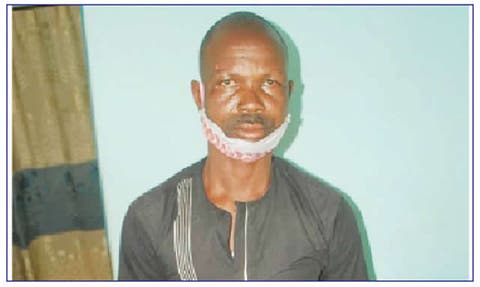 Peter Ayemoba, 50, of New Golden Prime Street, Rafin-Sanyi in the Suleja Local Government Area of Niger State was recently arrested by the state police command after a complaint by his relation that he was sleeping with his two daughters who are now 22 and 20 years old. He admits to ENYIOHA OPARA that he has been sleeping with his daughters since they were 15 and 13 years old respectively

You were arrested for sleeping with your daughters, for how long did that happen before your arrest?

I was sleeping with them separately but with their consent and it continued until I was arrested. Honestly, I cannot explain how I could do that to my own daughters but there was a spirit that kept on telling me that I wasn’t the first man that slept with his daughter, so I should not worry too much about it.

When my daughters rejected my overtures, I normally told them that I wanted to be closer to them since their mother was dead; and at times, I threatened to kill them and commit suicide if I didn’t sleep with them. One day, I referred them to the Bible passage about how Lot had sex with his daughters and was not punished by God. I told them intercourse between father and daughter was normal and in the Bible.

Were you having sexual intercourse with them for ritual purposes?

God knows I will never use my daughters or any of my children for ritual purposes; any father that does that is subhuman and evil. So, I will not do that. I am a father of six children – two daughters and four sons. I love them so much that I cannot harm them, let alone use them for rituals. The internal source of wisdom would never forgive me if I do that.

Just as I said, the death of my wife got me devastated to the point that I didn’t know what I was doing. What I suspect is that somebody must have placed a curse on me because what I did for seven years is not normal, to be frank. What I did after my wife died was to bond with my children and they became closer to me until gradually, I started sleeping with the girls, but it was not for ritual purposes.

Did you not marry after the death of your wife?

Yes, I got married few years after my wife died. My daughters forced me to remarry so I could satisfy my sexual urge because my actions were abominable.

Despite that, I still made love to them at the slightest opportunity or when my new wife was not at home. It went on like that until I was arrested by the police. It is quite unfortunate. Honestly, what is happening to me is not normal; I need to sort myself out, either physically or metaphysically so that I will have peace of mind.

Considering what you did to your daughters, do you see yourself as a responsible father?

It shows that I am an irresponsible father to the core. Do you know that people have been asking me if they are truly my biological daughters? I don’t know what made me have sex with my biological daughters for seven years repeatedly. I deserve any punishment meted out to me as far as this case is concerned. I suspect that somebody wants to destroy me.

How many times did your daughters abort?

Honestly, I don’t know. Moreover, I don’t follow them around. I’m surprise none of them conceived after several years of having sex with them. It beats my imagination but girls of these days are something else when it comes to that. Again, I’m really surprised; they might have been taking drugs in order not to put the family to shame.

Was your second wife aware that you were sleeping with your daughters?

She was not aware because it was a secret between me and my daughters. Nobody knew about it until it was reported to the police. Their stepmother did not bond with them; she was treating them like strangers and because of that, they were not close enough to discuss matters like this.

Now that your wife knows you were sleeping with your daughters, is she planning to divorce you?

Definitely, I need not be told that she will leave me. She was sharing me with my daughters; I don’t think she will accept that. I’m sure she would have moved out of the house by now. The worst offence you can commit against a woman is sleeping around, let alone sleep with your daughters. It is a mortal sin that would never be forgiven. I think I have insulted human race and I’m ruined.

Did your four boys know you were sleeping with their sisters?

My daughters are older than my sons but I don’t think they knew, otherwise they would have confronted me. As I said earlier, it was a secret between me and my daughters and now that they know, I’m sure they will not like to have anything to do with me again. I don’t think I will step into my house again; it was the work of the devil. I think I wrote a letter to the devil and he replied me by making me to sleep with my daughters. It is unbelievable.

Did you hypnotise your daughters so you could sleep with them at will?

No, I did not. I bonded with them for years and they believed what I told them about having sex with me so I could not have hypnotised them. They voluntarily and willingly accepted to be having sex with me anytime I demanded it. What baffles me is that over the years that we were having sex, we were happy, but all of a sudden, they reported the matter to a family member who brought us to where we are (police station). Maybe my cup was full so the law should take its course; I am ready for any eventualities.

Do you think your family and community will ever forgive you?

It is a difficult question to answer, but the truth of the matter is that I will be banished. I’m from Agenebode village in Etsako West Local Government Area of Edo State and I own a block industry in Suleja, Niger State. My people will kill me if I travel to my village; they will not accept me and they will not forgive me because what I have done is an abomination to the gods of our land.Copyright PUNCH.