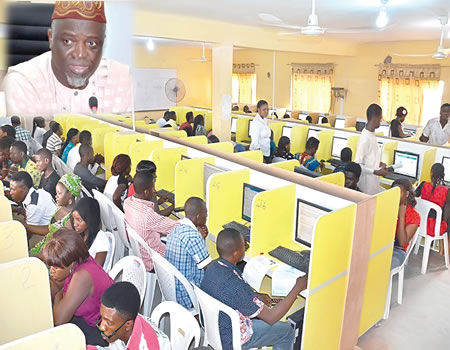 Registrar and Chief Executive Officer (CEO) of the Joint Admissions and Matriculation Board (JAMB), Professor  Is-haq Oloyede, has disclosed the various techniques key stakeholders use in undermining activities of the body, as well as sundry challenges it confronts in stemming the tide of examination malpractices

This is just as he announced that the board withheld the results of 34,120 candidates in the 2019 Unified Tertiary Matriculation Examination (UTME) for alleged examination malpractices.

Professor Oloyede, who announced the results of the examination held between April 17 and 19, on Saturday, in Abuja, said of the 1, 826, 839 candidates that sat for the examination, 1, 792, 719 had their results released, while he lamented the high level of examination malpractices perpetrated during the exercise.

He announced that 34,120 results were being withheld over examination malpractices, 15,145 of which were being given further scrutiny as they were related to cases of identical twins.

He said the board had also canceled results of candidates with multiple registrations and those who wrote two or more examinations with identical fingerprints.

In the results announced, 15-year-old Ekene Franklin from Imo State emerged as the overall best candidate, scoring 347 points in the examination.

Oloyede warned that this was the last time that double registration would be given any consideration, saying, henceforth, anyone who registered more than once would be treated as having engaged in examination malpractice.

He alleged that powerful Nigerians had been sabotaging efforts of the board to curb examination fraud, adding that some had gone to the extent of forging his signature to blackmail JAMB.

“It is against the backdrop of the foregoing that it was not only amazing, but also entertaining that a cluster of fraudsters who had been benefiting from the crime would go to the extent of forging the Registrar’s signature, writing fictitious petitions, threatening the government through JAMB that heavens would fall, except certain rules are relaxed and engaging in other unbecoming conduct to pressurize us to capitulate to their desires. They were mistaken,” he said.

“The foundation of examination malpractice is laid at the point of registration, with the active connivance of some CBT centre owners who allowed themselves to be infiltrated by those who parade themselves as owners of tutorial classes. Unfortunately, some elite institutions that charge exorbitant fees, which they had made the parents part with in the name of secondary education, became active in the procurement of ‘best results’ for their students at all costs. These characters have permeated the system such that it is Herculean to confront and dislodge them.

“When one of the examination bodies recently decided that one category of teachers would not supervise its public examinations, all hell was let loose. However, the truth of the matter is that the body is correct in its resolve.

“There are many ways of multiple registrations. While the rich procure graduates and senior undergraduates to write examinations in the name of their pampered children who would then use the highest score to obtain admission to some institutions of choice, the not-too-rich do multiple registrations by simply re-arranging their names and then claiming the highest of the scores obtained.

“The extent of this infraction is appreciated through the huge amount of money JAMB makes from the correction of names and dates of birth by the perpetrators.

“One of the major strategies of JAMB to counter this is the introduction of a short code where every candidate types his or her name and sends it directly to 55019 on the particular phone. This was introduced in 2018 UTME, but it did not reduce the menace of multiple registrations, as over N200 million was still paid to JAMB by the syndicate to correct data relating to premeditated name error.”

The professor explained further that “another means deployed was to register more than one candidate who would all log into the exam hall and log out the legitimate owner who would now call for help as a result of not being able to access the questions. This scenario would, ultimately, cause the rescheduling of exams and allow professional examination writers to have as many candidates as possible to sit for.

“The board, this year, has deployed appropriate technologies to detect not only the facial duplication of candidates, but also biometric multiplication. The board has also gone as far as identifying identical twins and siblings whose existence should be recognized, but not allowed to create a loophole for the fraudsters. Many twins across the country will testify that we were in touch with them as a way of verifying their identities. For those we are not sure of their distinct identities, we have created a platform to justify their characteristics in order not to throw the baby out with the bath water.”

Identifying impersonation as another means deployed by candidates to cheat in the examination, Professor Oloyede explained that this was also recorded in many parts of the country.

“In the 2019 UTME, we were able to identify a large number of impersonators who had been writing UTME for candidates. Most of the tutorial masters specialise in recruiting such professional writers for the candidates. They do so by using the names directly or variants of the name or by multiple registrations.

“An example is in Anambra State where two centres registered a large number of impersonating candidates. In such cases, the results of the candidates have been cancelled and the CBT centres delisted.

“We have also tracked the registration centres and the computers used. In cases where we were able to ascertain the culpability of the centres, we delisted them. Where we have doubts, our principle is that we would rather allow 10 criminals to go scot-free than allow an innocent person to be unjustly punished.

“Another dimension of impersonation is a futile attempt of defeating the biometric capturing of 10 fingers that was introduced in 2017. The fraudsters thought they could beat the system through ‘contributed fingers’ where two or more persons would use their fingers to register for candidates thinking that any of them would be able to write for such candidates, if the system allowed it. Two examples of this case are in the Aminu Saleh College of Education, Azare, where someone’s finger(s) was discovered in 42 persons’ registration; and in Bauchi State University, Gadau, where one person’s is traced to the registration of 64 candidates. That was with a view to allowing any of the finger-contributing impersonators to access the examination hall.

“The board went to the extent of interacting with the principal officers of the institution in Azare. We must appreciate the Council Chairman and Provost of the College whose cooperation led to the confession of the culprit that he contributed the fingers in good faith.

“The confession, as bad as it was, is good for the board as without it, there would have been doubts in the accuracy of the technology deployed to determine and detect the infraction.

“Another example was in Borno State where in Nassara Computer Academy, Maiduguri, 233 candidates had one particular finger included in each of their biometric registration. We have made representative arrests and we must thank the Inspector-General of Police and the Commandant-General of the NSCDC for their wonderful cooperation,” he said.

Oloyede listed deliberate disruption of the examination process, manipulation of biometrics, syndicate of close centres, extortion of candidates and collusion of some private CBT centres with parents as other means of perpetrating fraud in the system.

“Unknown to many that the robust of question bank of JAMB makes it possible for the deployment of as many sets of questions as the number of sessions in a year, they devised means of recording deployed live questions with a wrong notion that such would be helpful to later writers of the year’s UTME.

“Some private CBT centres engage in examination malpractice by taking screen shots of the questions and selling them to tutorial centres. At Risk Global Centre, Anthony, Lagos, for example, the owner (Mr Godswill Okpai) and two of his sons (David Emeka Okpai and Ebere Obinna Okpai) as well as the local technical officer of the centre took screen shots of questions from the computers in his centre and sold same to the tutorial centres for N5,000 per screen shot.”