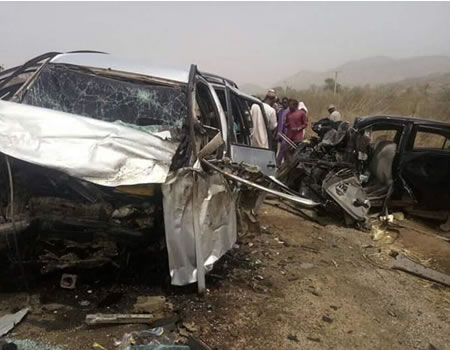 MORE details emerged, on Saturday on how 19 members of a vigilance group died  and 38 others seriously injured in a fatal auto crash along  Daudawa-Funtua road in Funtua Local Government Area of Katsina State, on Friday.

Members of the vigilance group from Rafi Local Government, Niger State, were said to have embarked on the journey to obtain a ‘bulletproof’ charm from a boy in Tsaunni village in Tsafe Local Government Area of Zamfara State.

A survivor of the tragedy, Buhari Usman, who spoke to newsmen on Saturday, claimed the accident occurred while the victims were returning from Tsauni village.

According to him, they went to the village following information that a boy was in possession of a potent charm against bullets.

“We were told his charm is good. People have used the charm and they claimed it has worked for them.

“As members of the vigilante, we felt we need it to protect ourselves against incessant cases of banditry, kidnapping and rustling.”

He said it was when they were coming back that the accident occurred when the driver of the vehicle dozed off and they suddenly found themselves inside a big ditch.

The Chairman of Funtua Local Government Area, Malam Lawal Sani has said the 19 vigilante members who died on along Funtua/ Daudawa road on their way back from Zamfara State will be convey to their local government area of Niger state for burial.

This was even as he said the council will equally foot the medical bills of all the 38 injured now receiving treatment in Funtua General hospital.

Usman, who is responding to treatment at the hospital, thanked the local government chairman for his kind gesture, praying to God to reward him and his team abundantly.

The Federal Road Safety Corps (FRSC) confirmed the death of 19 persons, while 38 persons others were injured in the accident along  Daudawa-Funtua road.

The FRSC Sector Commander in the state, Mr Godwin Ngeuku, who confirmed the figure while speaking with newsmen in Katsina on Friday, explained that the crash occurred on Friday morning at Daudawa village, a few kilometres to Funtua Local Government Area of Katsina State involving a Mitsubishi  vehicle.

The sector commander disclosed that the driver of the Mitsubishi bus conveying the victims lost control while on top speed resulting in the vehicle somersaulting several times.