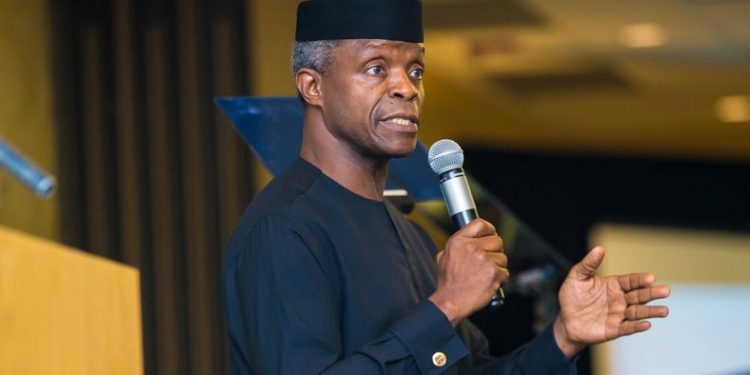 He said additional 660Mw is expected from some power plants before the end of this year.

Osinbajo spoke on Thursday at the inauguration of the two 60MVA, 132/33kv substation and associated 132kv transmission lines at Abeokuta, Ogun State.

He said the inauguration was an important part of Federal Government’s effort to improve the supply and quality of power to homes and businesses in Nigeria, adding that in the past three years, resolving the power problem has been a top priority for the government.

Giving an update on the state of the power sector, Osinbajo said: “Currently we have about 13,427Mw of installed capacity, while available capacity is about 8,342Mw. This was achieved by the efforts our government and its private sector partners in rehabilitation and commissioning of turbines in Shiroro and Egbin power stations as well as Delta Power, Sapele and Gbarain power stations.

“Before the end of this year, new generation is expected from these power stations:  Gbarain, an extra 115Mw, Kashimbila 40Mw, Afam V 240Mw, Gurara 30Mw, Dadinkowa 20Mw and Kaduna 215Mw.”

He also noted that in the long term, several solar power plants will come on stream. The national grid already has a transmission capacity of 7000Mw, an increase from about 5000Mw. This is due to the completion of several transmission projects. On the contrary, he noted that the distribution capacity of the 11 distribution companies (DisCos) is significantly low hovering around an average of 4000Mw. This low capacity has limited the capacity to deliver power to end-users despite the substantial generation and transmission capacities. DisCos provide distribution assets and metering to consumers. We are resolving this issue through the Meter Asset Providers and expect the initiative will close the metering gap of 5.3 million customers, he added.

He said: “At the heart of that strategy is the recapitalisation of the DisCos first. We have to come up with more resources in one way or the other. Part of that recapitalisation process is in the Siemens’ phased electrification roadmap, which was commissioned by President Muhammadu Buhari recently. The whole idea of the roadmap is to deploy financing and technology on commercial terms agreed with transmission and distribution companies in partnership with the German Government and Siemens to increase transmission and distribution capacities to enable power delivery of at least 7000Mw to consumers.

He listed NDPHC’s contributions to the power sector, adding the company has installed close to 4000Mw, 20,000 solar home systems (SHS) and accounts for 37 per cent of generation to the grid. He noted that with the new project, power supply to Abeokuta and environs will increase from 70Mw to 250Mw.

The Managing Director, Transmission Company of Nigeria (TCN), Mr Usman Gur Mohammed, said the sum of $1.66 billion had been secured from the World Bank and other multilateral financing agencies to improve the transmission network.  He also called for capitalization of the DisCos, which will require $4.3 billion to make them (DisCos) efficient and be able to take available generated power and the 8100Mw transmission capacity currently. He listed the achievements of the TCN under his watch, including retrieval of 775 containers of transmission equipment abandoned at the ports over the years.

Ogun State Governor Dapo Abiodun expressed delight about the project highlighting the gains it will bring to businesses, industries and homes in Ogun State. He reiterated his government’s commitment to focused and transparent governance, creating an environment for businesses and investments to thrive and his plans for the state’s development.