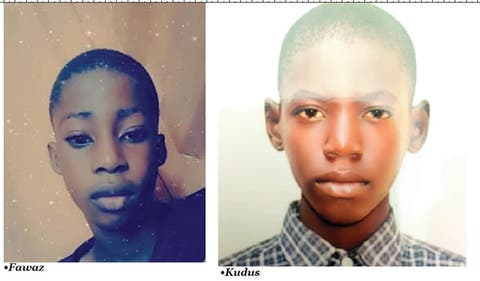 There is anxiety among parents of two teenage friends and neighbours on Igbonla Street, Ketu, Lagos State, since they went missing one week ago.

Fawaz Surajudeen and Kudus Oseni – both 14 – had reportedly gone out together last Sunday but had not returned home since then.

It was learnt that they attend the same school and are both in Senior Secondary School 1 in the same class.

Fawaz’s mother, Bose Surajudeen, told our correspondent on Saturday that the boy left her shop located within the neighbourhood around 2pm that Sunday and went home to have a bath.

She said some minutes later, she called his father who confirmed that he was at home playing.

The mother explained that when she called her husband back around 6pm to ask after Fawaz, he told him he was no longer at home.

She stated, “His father said he didn’t inform him when he was going out. We thought he was playing around and would soon return home. We later knew from his friend that he and Kudus went to a restaurant within the community to buy food.

“He said three of them were supposed to go but they excluded him because he went to fetch water and they didn’t wait for him. Since then, we have not seen them. They are both in SS 1 and are in the same class.”

Sunday PUNCH learnt that the case was reported to the police at Ketu and Alapere police stations and their pictures were collected by the police.

The mother added, “The police have been telling us to come back. Some people said they saw him with one Samson at Agboyi (a neighbouring community). We went there but the boy said he didn’t see him. No one has contacted us. We are worried.”

Kudus’ mother, Kehinde Oseni, was distraught and could not speak to our correspondent on the incident.

But her twin sister, Taiwo, said Kudus had informed his mother that he was visiting Fawaz but did not tell her they would be going out together.

Taiwo said, “They live close to each other. Some neighbours who saw them said they told them they were going to Agboyi but didn’t mention whom they were going to see there. We have been searching everywhere in Agboyi without any success. They are both friends and attend the same school.

“We first reported at Ketu Police Station from where they referred us to Alapere Division. At Alapere, the police asked us to bring their photographs so they could broadcast their missing and we have done so.

Police Public Relations Officer in the state, CSP Muyiwa Adejobi, had yet to get back to correspondent with comments on the incident as of press time.