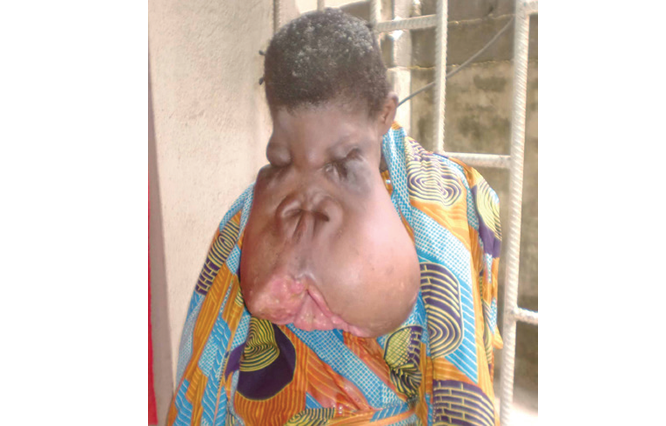 Going by the series of treatments and supports she has undergone in the past eight years, Mrs. Yinka Popoola needs N5 million for a surgical operation in India. Popoola who is struck with the chronic facial tumour can’t eat anything accept liquid food.

The victim has been abandoned by her husband who she doesn’t know his whereabout since eight year ago.

Also, Mrs. Popoola’s four children have left her alone, accept the Solomon for Jesus Foundation, a non-government organisation that has been supporting her.

The patient, is a chronic facial tumour victim whose mouth became disproportionally bigger than her face.

According to a medical report from Lagos University Teaching Hospital (LUTH), Idi-Araba, Lagos, the victim a known patient of the unit that was referred to them about two month ago from another unit within LUTH.

The medical report shows histological report of malignant fibrous histiocytoma of the face. The medical report further stated that Mrs. Olayinka was first seen at the Maxillofacial Unit at LUTH eight years ago when she developed progressive swelling of the face, but histology then revealed neurofibromatosis/elephantiasis.

“Biopsy was recently repeated due to mismatch with clinical findings for second opinion. She was being worked up for Neo-adjuvant chemotherapy but has requested for a medical report to allow her sort for second opinion, it stated.

The Founder of Solomon for Jesus Foundation, Pastor Monday Solomon, said that they sent Mrs. Popoola’s case to one of their partner hospital called Fortis Memorial Research Institute in India which can carry out the corrective surgery. Solomon added that they are soliciting the public to assist the victim so that they can fly her to India for urgent medical treatment.

On treatment advice by the Cosmetic, Reconstructive and Plastic Surgery, Fortis Memorial Research Institute, Gurgaon, India, Dr. Anil Behl said, ”This is a huge tumour. We need to evaluate it and then plan a microvascular composite tissue replacement. Nigerians that are moved to assist could send the financial assistance to:
Popoola Yinka, account number; Diamond Bank: 0102312594.