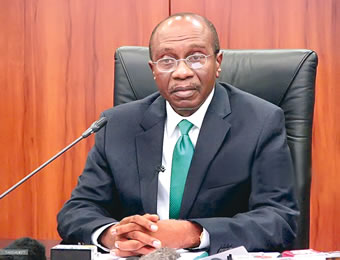 The Governor of Central Bank of Nigeria(CBN) Dr Godwin Emefiele said on Wednesday that tough times are ahead of the country in view of a rapid increase in population on yearly basis and what he called penchant of Nigerians to sabotage government policies on economic growth.

Dr Emefiele, who stated this while appearing before the Senate Committee on Banking, Insurance and other Financial Institutions, on in the Senate, said that Nigeria will be the third largest populated country in the world by 2050.

He said that the country by 2050 is projected to have a population of 425million people up from the current 200million population.

The CBN Governor said: “The road ahead for Nigeria is still rough and very tough. But I want to appeal to all Nigerians that a time comes in the history of a country where you have to learn to respect the policies and laws of a country.

“Part of the problem that we have seen in Nigeria is lack of respect for the policies of this country. Nigeria is very good at putting in place policies that are sound and workable.

“But implementation has always been almost zero. And it is arising because we see sabotage activities. We see people when policies are made, where they pick up the pieces of paper about the policy, what they think about is how do we circumvent this policy?

“The Central Bank of Nigeria, if given this mandate, will push very hard to ensure that those who seek to undermine the policies of Nigeria without respecting the laws of this country will be brought to book under any circumstances. And hat s why I said please pray for us because the road ahead is still rough.”

He said that the apex bank will strongly support the Federal Government in its diversification drive towards making the economy stronger while widening the scope for productive engagements of millions of Nigerians.

He also pointed out that the price of a barrel of palm oil in the international market is higher than that of crude oil now which would have been fetching the country huge foreign exchange earnings, had it not been abandoned since the 1970s when the oil boom occurred.

He added: “Aside from the Anchor Borrowers programme, we are also looking at special programmes targeted at wholesale growth of the agricultural sector in Nigeria. Aside from rice and other small good crop markets, we have started looking at palm oil. Because we believe that this country has a lot of potentials in palm oil.

“If you think about what this country was in the 50’s and 60’s, Nigeria being a country at that time that controlled 40 per cent market share in the palm oil industry, exporting its palm oil to different parts of the world. But because we found crude oil, we receded and abandoned it.

“There are countries when they have the opportunities in agriculture and also have opportunities in the crude sector, they didn’t let their guards down. But unfortunately we did and that is what we are paying for today. So that when there are some external shocks in the crude oil market, we sneeze it but we only smile when the market is good.

“We will grow that market back again. And after that, we will go into cocoa in the South West area to be sure that what we are doing permeates all the nooks and crannies of this country. Because we think we owe Nigerians this.

“We just came back from the IMF/World Bank programme in April. And in the World Bank’s/IMF’s World Economic Outlook, Nigeria is positioned as a country whose population will grow and rise to over 425 million people by the year 2050. That will present Nigeria as a country with the third largest population in the world after China and India and indeed surpassing the United States of America in population.

” I worry and I do think that we all should worry that a lot of work needs to be done to make sure that we are able to out in place policies that will make life good for this 425 million people when we are the third largest population in the world.

“So, we from the Central Bank of Nigeria from the monetary policy side, have come to realisation that using the instrumentality of the Anchor Borrowers Programme where access to credit is being provided to our masses all over the country, that it will be a way to generate employment and boost economic activity amongst our rural population.

“I visited one of the Asian countries recently and happy with what I saw but I came out of the country sadly, because I could see the level of development that this country has achieved over the last 50 years. And I cast my mind back and look at my country Nigeria that what have we achieved?

“This is what gives me the push that at my age of 57, I saw this country when it was good. That I am looking at the country today, I don’t want to say it is bad but I want to say that we have a lot of work to do. Because the country has no doubt receded somewhat.

“So from our side in the monetary policy, we will do everything possible to ensure that with the mandate that is bestowed on us, we will push this country forward”

He clarified the exchange rate policy of the government which he said is not multiple as being alleged.

” Because the investors and exporters will know which is the dominant market for procurement of foreign exchange today, it hovers around that rate. But what you will find is multiple windows and we don’t have any apologies for it.