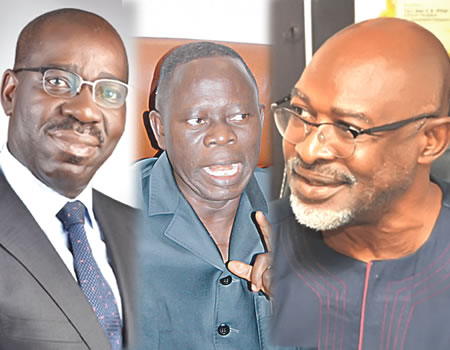 IN the run up to the May 29 inauguration of President Muhammadu Buhari for a second term, all seems to be quiet on the Edo State front as regards the choice of a minister from the state. Actors from the ruling All Progressives Congress (APC) are taking the whole thing in their stride, hoping that they may be called upon to take over from the current representative of the state in the federal cabinet, Minister of State for Health, Dr Osagie Ehanire, from May 29.

The tide of events is no longer in favour of the Heartbeat State. Gone are the times when the state produced super ministers in form of the late Chief Tony Anenih and Mike Onolemhemen who were in charge of the works ministry. This time around, it was a junior minister that was given to the state, after all, no condition is permanent, as the saying goes.

Unlike in other states where the actors and the different senatorial districts are openly jostling for the plum position, the situation is rather different in Edo. While the actors in the state may differ on whom and where the minister comes from, they are apparently ready to accept whoever emerges at the end of the day.

If the result of the 2019 presidential election in Edo State is anything to go by, the current minister from the state, Ehanire, should be packing his bag by now. In the overall election result, the Peoples Democratic Party (PDP) snatched victory from the jaws of the APC, even right in his home base.

In the national election, President Muhammadu Buhari of the APC scored 267,842 votes to trail Alhaji Abubakar Atiku of the rival PDP who won with 275,691. Ehanire, a medical practitioner, and by extension, APC, lost out in all the election as he lost his ward, House of Representatives and senatorial district seats to the PDP.

The 2019 elections’ result was a repeat of the 2015 elections when former President Goodluck Jonathan of the PDP defeated Buhari in Edo State, with the same Ehanire losing in his Ward I and Oredo Local Government Area. Edo South Senatorial District was also won by incumbent Senator Matthew Urhoghide of the PDP in the election.

Just like in 2015, Ehanire, elder brother of Senator Daisy Danjuma and in-law to former Minister of Defence, General Theophilus Danjuma, was not visible in the state during the just-concluded elections. Rather, it was the party national chairman, Adams  Oshiomhole, Governor Godwin Obaseki and other party big wigs who traversed the length and breath of the state, wooing voters for the president’s second term bid.

However, the minister’s talisman, a source told the Nigerian Tribune, has always been his membership of the Congress for Positive Change (CPC) which was President Buhari’s original political party before its fusion into the APC as one of the legacies parties that formed the new coalition in 2013. As a core Buhari loyalist who stood with the president through thick and thin, chances are that he would probably be nominated again as minister.

A top party member from Edo South Senatorial District who would not want his name in print however insisted that Ehanire time is up. Efforts, he said must be rewarded, adding that the minister had never made any meaningful impact in the affairs of APC in the state. It was high time those who contributed to the victory are rewarded in form of ministerial appointment, he said.

The source lamented: “As they jocularly say in Pidgin English, the appointment of Ehanire as minister representing Edo is a clear case of monkey dey work, baboon dey chop. Membership of CPC should not be the basis of appointment as minister. Ehanire was not visible during the recent elections and campaigns.”

He advised that the party leadership in the state must thoroughly search for “that Edo South person who will bring value to the party and the people.” Ehanire, he emphasised, is not the choice of Edo South leaders and should not be re-appointed. After serving for four years, it was time to leave the scene for another person.

He therefore suggested that people like a former member of the House of Representatives, Honourable Patrick “Igodomigodo” Obahiagbon, should be considered for the position. The bombastic former federal lawmaker who is very close to Oshiomhole, contested for the Edo South Senatorial District in the last election but lost to incumbent Senator Matthew Urhoghide of the PDP.

He said the vociferous campaign by Igodomigodo for the party, no doubt, played a significant role in the votes garnered by the APC in the election, adding that leaving him out in the cold would be most unfair, most especially as he has kept faith with the party.

Another top party member from Edo North Senatorial District who also pleaded anonymity said that the ministerial slot ought to go to his home constituency which he said has kept the faith of moving Nigeria to another level. President Buhari won in all the six local government areas that make up the district while the party lost in Edo South where Ehanire and Obaseki hail from.

The APC chieftain said: “If not for the overwhelming support of the Edo North people, the president wouldn’t have been able to score the required 25 per cent in the election. Commonsense dictates that those who gave much should be rewarded. While the APC lost in Edo South and Central senatorial districts, it won only in the North and so it should be rewarded accordingly.”

At the party’s state headquarters on Airport Road, Benin, the state capital, mum was the word but one of the deputy chairmen who also pleaded anonymity said the party was yet to decide on names to be sent to Abuja for consideration as minister.

On a second thought, the APC chieftain told the Nigerian Tribune that the faith of the party faithful and supporters in Oshiomhole was total and that they were ready to support whoever he is going to support. He also said the party members and loyalists would willingly stay on the line if the governor’s choice emerges at the end of the day.

History may just repeat itself once again if the feelers from the ruling party are taken cognizance of.