The All Progressives Congress (APC) has set out campaign plans that will see President Muhammadu Buhari visiting all the 36 states of the federation with a grand finale rally in Abuja, the Federal Capital Territory.

THISDAY gathered from presidency sources at the strategy and inaugural meeting of the party’s presidential campaign council, held at the Presidential Villa Thursday that the party has scheduled its national campaigns to last for 18 days commencing on January 12.

“The next stage of presidential campaign has been scheduled to begin next Saturday, January 12 in Bauchi.

“The plan is for the president to campaign in all the 36 states, though some states will be paired so as to conclude the tour in 18 days,” a source said.

The meeting, which was presided over by the president, who assured the participant he was sure of victory at the February 16 poll, was, however, not attended by any of the party’s governors that are members of the council.

But the party’s National Publicity Secretary, Malam Lanre Isa-Onilu, quickly dispelled claims that the governors’ absence was a sign of worsening crisis in the party, explaining that being an administrative meeting, the presence of the state chief executives was not mandatory.

According to a THISDAY source, however, the meeting dwelt mainly on campaign schedules and strategies to adopt in order to cover all the states in view of the time constraint.

He said Bauchi and Gombe States would be the next port of call for the APC presidential campaign train, which would hold on Saturday.

It was learnt that Buhari and top leaders of APC would be using the Bauchi campaign rally to formally receive former national chairman of the Peoples Democratic Party (PDP), Alhaji Adamu Mu’azu, into the ruling party.
The source explained that the campaign schedule was drawn up in such a way that the president would visit some of the states in pairs.

For instance, the source said that the president would campaign in Rivers and Bayelsa States in one day.
Other states likely to be paired include, Ebonyi and Cross River, Enugu and Anambra, Kogi and Benue.
The ruling party had earlier said that it would unleash an intensive national campaign in the New Year that would take it into the general elections.

Buhari Sure of Victory at Presidential Poll 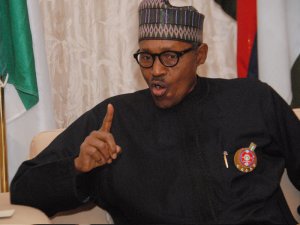 President Buhari earlier in the day told members of the presidential campaign council that he was confident of winning the forthcoming February 16 presidential election.

Speaking at the opening session of the inaugural meeting of the campaign council at the Banquet Hall of the Presidential Villa, Abuja, Buhari said even though he was sure of victory, members of the council should notwithstanding leave no stone unturned in leading the party’s campaigns effectively.

He also tasked members of the council to justify the confidence people have in them by dedicating themselves to the task of winning the polls.

He said, “I would like to appeal to you to dedicate and commit yourself once again to the task at hand. There is no doubt that victory is with us – it is ours, but that shouldn’t mean we should rest even for a moment.

“Even though we are confident of winning, I urge you to work as hard as you can so that we can maximise the scale and extent of our victory. I urge you to rise to the challenge of the great expectations this party and Nigerians have for you and the confidence that I personally have in the ability of all of you to deliver.”

He used the opportunity to remind members of the council that their selection was rigorous; pointing out that their appointment into the council showed that they were the best of all.

He then proceeded to remind them of the essence of the meeting, which he said was called for the consideration and approval of the structure and operational modalities of the campaign council.

He added, “Needless to add, your selection was not easy, because in forming this council, the party settled only for the best. You are the cream of the party and I assure you that with unity of purpose and effective harmony and communication, there is no political opponent you cannot overcome.

“I wish us the best of luck in this campaign. Our agenda for this meeting is to consider and approve the structure and operational modalities of the Presidential Campaign Council – the terms of reference of your various directorates and organogram that will determine how you will relate with each other and how you will eventually discharge your responsibilities in the campaign.

“I trust this will ensure a smooth campaign and a resounding victory for our party and its candidates. I therefore urge you to carefully read the documents and make observations designed to improve our performance.

“The document containing the proposal on the structure and operational modalities of the council and its directorates for the 2019 election is hereby presented for your consideration and approval.”

Answering questions at the end of the closed-door session, National Chairman of APC, Mr. Adams Oshiomhole, disclosed that the president would lead campaigns in each of the 36 states of the federation.

According to him, yesterday’s meeting was convened to review the party’s programme of activities, calendar of campaigns, various interests group within the country, the business community, the youths, women, people with disabilities and various special interests groups.

He said, “The whole country is Mr. President’s constituency. So, he will have to visit each of the 36 states with appropriate message reminding people always.

“You know in the country today, given the challenges of survival, people tend to forget where we are coming from, they just look at where we are.”

On why the governors were absent at the meeting, Oshiomhole said they had the responsibility of governing their states and so it was more beneficial for them to remain in their states than to come to Abuja.

He said, “Because they are governors, they are governing their states. Don’t forget that elections are not defined in Abuja, it will take place in the 36 states and I’m sure there are APC members who are campaigning for the House of Assembly, various Federal House and Senate constituencies, governorship constituencies.

“So, it will not be helpful to bring them to Abuja. Here, it is about policies. It will be consummated and translated to practice across the 36 states, 774 local governments and awards.”

The post Buhari to Campaign in 36 States, Says He Will Win appeared first on THISDAYLIVE.