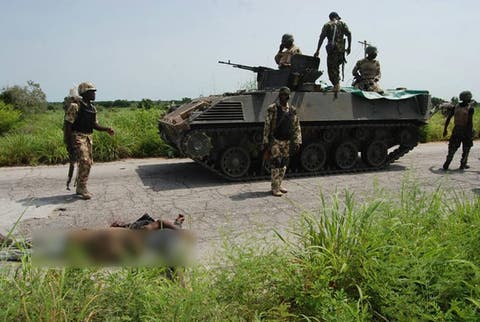 Our correspondent learnt that the casualties were among the five people abducted by the insurgents at Njimtilo.

It was learnt that the insurgents, who also stole food items from Njimtilo, later shot them dead, leaving the fifth abductee, Abdullahi Kabir, with gunshot wounds.

Speaking to our correspondent, Prophet Sunday Solomon, founder of Bethel Assembly International, Maiduguri, said the insurgents stormed the compound where he resided at Njimtilo at about 12.25am.

He said when he heard some footsteps within the compound, he thought the gate was not locked and he came out to lock it.

He said, however to his surprise, a strange man pointed a gun at him and was calling on others to come in.

Solomon said he took the initiative and lunged at him and quickly headed for his door.

He said the attacker fired at him and it was a miracle that the bullets did not hit him.

The cleric said he was surprised that they were not able to see him and his family where they hid in one of the toilets in his apartment.

Another tenant in one of bungalows in the compound, Peter Ogoleh, said he saw the invaders through the window pointing a gun at one Isaac Dibal sleeping within the compound with his wife and baby because of the heat.

He said, “They took him inside to ransack their home for valuables which they carted away.”

According to him, they abducted Dibal and the four other men living in one of the apartments.

Some of the people living in the area said the insurgents later lined up the five abducted men about seven kilometres away from their home and shot them dead, with Kabir lucky to be alive.

He was taken to the Borno State Specialist Hospital by some of the residents of the area for treatment.

The Head of Operations, Borno State Emergency Management Agency, Bello Dambatta, said four persons were deposited at the morgue following the attack in Njimtilo by one of the ambulances of the agency.

He said one person was critically injured and admitted to the Specialist Hospital.