Bizarre rituals that ruined a marriage!

Most of our home movies are often packed with the most graphic and bizarre black magic rituals. It seems no movie is worth its salt without some scary looking witch-doctors performing repulsive feats. Are we so stipped in the stuff that we’re blinded by the fact that there are more positive forces than the black magic? 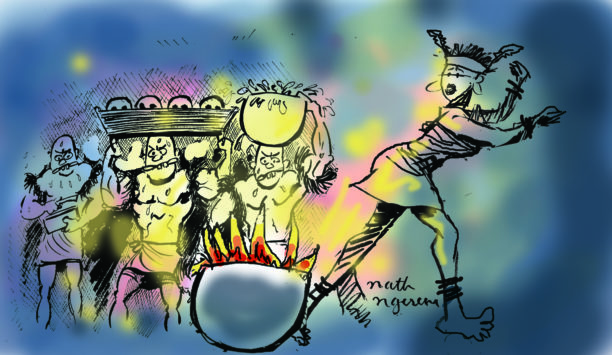 Recently, I learnt of yet another black magic escapade that really made my flesh crawl. Stephen, a middle-aged successful businessman was fuming from a set-back he just encountered and was on his way home, hoping to relax.

#Stephen’s steps quickened as he heard voices from his bedroom. It was 2.00 a.m. And he’d hurried back home from the airport after his flight was cancelled. His wife was obviously still awake and watching one of the local films she loved so much,judging from the cacophony of sounds emanating from their room. Happily, he pushed open the bedroom. His jaw dropped as he witnessed the most bizarre sight he’d ever seen. Smack in the middle of his bedroom was a raging fire in a pot surrounded by some weird-looking men chanting some horrible incantations. His wife, stark naked had some white spots dotted all over her body and she was holding a cock in each hand, dancing in a frenzy around the pot and stamping her feet on the floor. Her crazy dance took her to the bedroom door and she too stood rooted to the spot as she noticed the look of stunned disbelief on her husband’s face.

You could cut the silence that followed with a knife. Like a man in a trance, he watched the four men inch towards him, fright written all over their aces as they walked pass him. They mumbled some words and made a dash for the door, fleeing into the night. Stephen realised it would be futile challenging them without the neighbours cottoning on to what was going on. It was a living nightmare. Like in slow motion, he watched his wife set down the two cocks. It was like a cue for him to turn his back on her and beat a hasty retreat to his car.  He then asked his driver to take him to an hotel.  “As I checked into the hotel room”, Stephen recalled, “I began to do a replay of what I had just witnessed. It was worse than my worst nightmare!  This was a woman I was completely in love with. A woman I met barely ten years ago but who had taken over my life …

“I was married with children, when I met her. She was a divorcee also with four children. She’d wanted help on a project she was doing and a mutual friend sent her to me because the man in charge happened to be a good friend. After she got through with the project, she came to thank me. In short, we became friends, then lovers and I fell hopelessly in love with her.  The fact that I was married became insignificant as I fell under her spell.  When she had problems with her landlord, I put her in one of my houses and took over her financial responsibilities – including paying the school fees of her children. In the end, my wife got wind of what was going on and raised hell. I was getting disenchanted with her anyway and always told her that if she didn’t like what was going on, she could forget all about our marriage.

“She had to leave in the end. I was openly attending private and social functions with Mosun (the `new wife’) and spending most evenings with her. My first wife is a proud woman and she left with the two youngest children leaving me with our first two. When Mosun moved in with her children there was a lot of friction between her children and mine. Up till now, even after all these years, my children treat hers with great sufferance but one expects such things when you want to unite two unwilling families. And now this!  Just when I was thinking I had everything under control!  A bizarre thing like thing had to happen. How did those men make such a raging fire in the middle of a bedroom at that time of night for goodness sake?  What if the house had caught fire?  Was it her first or umpteenth time?  One or two close relatives I told were non-plussed. One or two tried to unravel the mystery of the ritual.

“According to them, the cocks would have been slaughtered in the course of the ritual and the birds prepared for the later. God only knows how many of such food I’d eagerly eaten in the name of love over the years. Was that why I fell hopefully under her spell?  Whatever explanation she had for going into the ridiculous but dangerous extent she went, I didn’t want to know. I stayed put in the hotel and made sure she was ejected and all trails of her presence removed before I went back to the house.  By which time, almost all our friends, relations and enemies and heard about it. I felt ashamed and humiliated. For my wife, it was her moment of glory and she made the most of it. Who would blame her?  I’m concentrating on my business for now and putting contact with women in whatever form on hold. The effect of the nightmare I just went through might take forever to go away. Talk about baptism and fire …”

Thoughts for the new year: Letting go and letting God

“How soon?  When? How?” At other times, we find that we even want to help! Doesn’t that sound funny? We want to help God solve our own problems, and in ways that are our own. Sometimes we become so impatient that we snatch back our dreams and cry on the Lord.  “But why are you so slow?”  The answer is that we never gave he Lord any chance to work on our dreams. We never let go.  Maybe we don’t even really think that God can mend our dreams. Let us today declare that when we take a broken dream or problem to God, we will step back and allow Him to do His work unhindered, at his own time and perfect way …”  Anonymous.

Maggie, the Fosters’ maid, had a perfectly infuriating habit of interrupting her mistress with petty house hold problems in the middle of bridge games for high sakes. One day, her mistress threatened that if she ever interrupted again, she would be fired on the spot.

About two weeks later, the cards had just been dealt for a hand when Maggie appeared in the door-way.  The mistress saw her, but, as a test, ignored her completely while the hand was bid and carefully played. After the score had been entered, the mistress turned sweetly to Maggie and said: “I am glad you learned your lesson, Maggie. Now tell me what is on your mind”.

“I just wanted to say”, said Maggie, “that the house is on fire”.