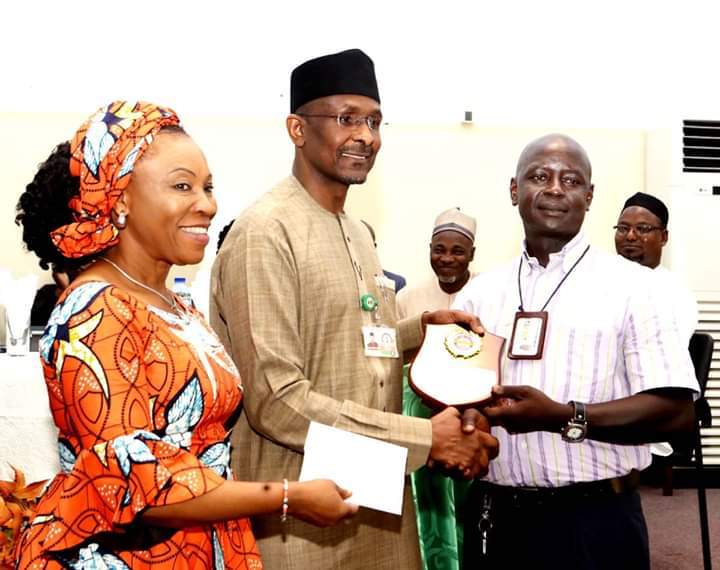 The Servicom Unit of State House on Thursday rewarded 10 members of staff including a shuttle bus driver, Yahim Nuhu, with various cash awards for outstanding performance for the year 2018.

The award recipient, who has put in a total of 8 years in State House, is very popular for his cordiality and enviable sense of dedication to duty among staff and journalists covering the seat of power.

‘‘His main schedule of driving shuttle bus makes it imperative for him to play the role of a first contact person to many highly placed visitors to State House and staff alike,’’ a citation on him at the award ceremony said.

Another recipient, Mr Gwaza Habila, a Principal Catering Officer on Grade Level 12, has put in 19 years and catered for prominent State guests, including Her Royal Majesty, Queen Elizabeth II, the Queen of England during a State Visit in 2003.

Habila was given the ‘‘Outstanding Catering Staff’’ Award and was praised for his ‘‘hardwork and effectiveness at Presidential functions’’ as well as imparting knowledge to his subordinates.

Arigu who has served for 23 years in the State House Clinic, all in the Medical Centre, received encomiums for being ‘‘very professional, courteous, respectful to staff and clients alike.’’

Congratulating the recipients, the Permanent Secretary, State House who was represented by Mr Bashir Alkali, Director, Finance and Accounts urged the staff to remain dedicated to ensure that State House maintains its place as the premier SERVICOM MDA in the country.

Arabi disclosed that in the past two years, State House had received back-to-back SERVICOM National Office Awards as the best SERVICOM MDA in its group of over ninety government establishments.

He also announced that the best Nodal Officer in 2018 was given to State House Nodal Officer, Mr A.M Ogueri, while the Awards of SERVICOM Champions were given to Secretary to the Government of the Federation and Permanent Secretary, State House.

‘‘The benefits for giving these awards are to increase employees’ productivity, performance and organization’s profitability. When this happen, we retain top talents in the Civil Service, reduce mediocrity in the system, uphold excellence and create team spirit,’’ she said.

Introduced in 2004, SERVICOM entails the Government entering into a SERVICE COMPACT with all Nigerians. The core provision of the Compact is to provide basic services to which citizens are entitled to, in a timely, fair, honest, effective and transparent manner.