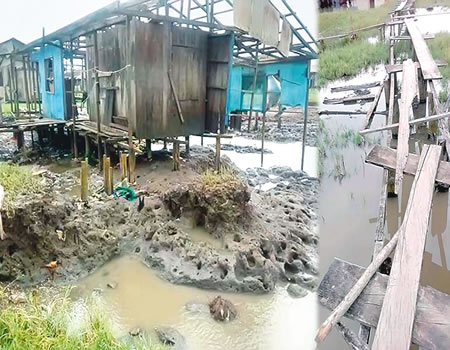 A surge from the Atlantic Ocean is threatening to submerge four communities in Ilaje Local Government Area of Ondo State, as the residents of the communities have raised alarm over the destruction of property by the Ocean surge.

The affected communities which include Mese, Ayetoro, Abereke, and Gbagira communities have, however, called for state and Federal Government assistance before the surge wipe out the communities.

According to the people of the area, the frequent surge had destroyed several houses, rendering many people homeless but said no life was lost.

A resident lamented that the latest surge which started some three weeks ago had been consistent, gradually wiping out the coastal communities.

He said: “Many have been rendered homeless after the incident because their houses have been destroyed. We need government intervention. We need shoreline protection in that area.

“I can tell you that almost 70 per cent of the affected communities have been taken over by the ocean, this is very unfortunate for Ilaje people.”

Meanwhile, a group under the auspices of the Ilaje Advancement Forum (IAF) has called on the governments and other stakeholders to protect the residents of the affected communities.

Speaking on behalf of the group, the coordinator of IAF, Mr. Fadeshola Ojamomi said the sea incursion started in 2006 while the people of the area called the attention of the government to the ugly development.

“The Federal Government approved the sum of N8b for sea embankment project sometimes in 2006 and 2007 but nothing happened till date.

“We wrote to the governor recently and we are currently working on an open letter to the president via the national dailies,” he stated.