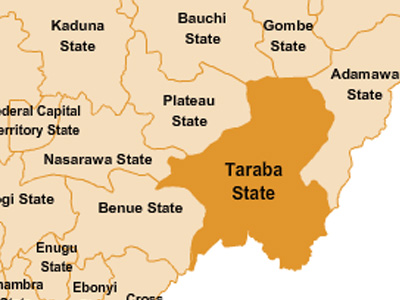 No fewer than seven persons have been killed in attacks by unknown gunmen on Wukari and Donga council areas of Taraba.

The Public Relations Officer (PPRO) for the state command, David Misal, said the incidents took place in the early hours of yesterday, adding that the force was on the trail of the perpetrators.

Chairmen of the two councils, Adios Daniel, and Nashuka Dan-Musa, appealed for deployment of “enough security agents “ to the affected settlements.

The first violence, Daniel relived, happened between Tor-Musa and Rafinkada villages in Wukari local government area, stating: “The attack occurred when three men, who were travelling to Donga in a 504 Peugeot vehicle loaded with rice, were ambushed and killed by the attackers. “

The unknown gunmen, he added, carted away the food item.

The second, which occurred at Annanum in Donga council area, saw four men, who were returning from their farms on a tractor, waylaid and butchered by the yet-to-be indentified assailants.

Dan-Musa regretted that the growing tension in the community had made it difficult to retrieve the bodies.

According to him, “on arrival at the scene, we discovered that the remains have been burnt beyond recognition.”

The council helmsmen however accused Tiv militias from neighbouring Benue State for the repeated attacks.

In a swift reaction, the President-General of Tiv Cultural and Social Association, Goodman Dahida, exonerated his kinsmen from the crime, insisting that the aggression was perpetrated by bandits.

He therefore called on the leadership of the two councils to desist from trading blames, but instead, to collaborate with security personnel and relevant stakeholders to ensure lasting peace in their domains.