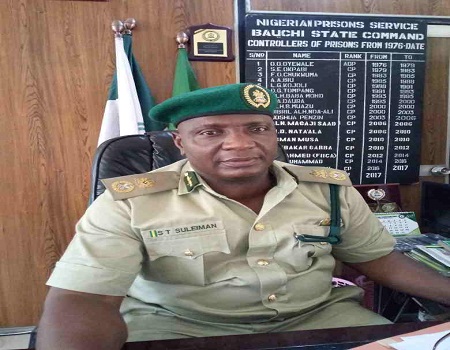 Five condemned persons who have been convicted to be stoned to death while another 10 whose legs and hands are to be amputated are said to be languishing in Bauchi prison presently.

This disclosure was made by the Controller of prison, Bauchi State Command, Suleiman T. Suleiman who lamented the present conditions of the prisons despite the efforts of the government to decongest prisons in the country.

Suleiman Suleiman who was speaking in an interview with newsmen in his office on Tuesday on the state of the prisons in the state also lamented that the two sets of convicts have been in jail for over 10 years without any action taken on them by the concerned authorities.

The Controller of the prison added that six other inmates have also been condemned to death while five are on a life sentence and 188 are on long term sentences ranging from two years and above.

According to him, the prison now has 947 inmates at the 500 capacity Bauchi prison saying: “The condemned convicts we have are mostly coming from Sharia Courts, this and other related cases like amputation of hands or legs have been in jail for over 10 years without knowing their fate. Their hands are not cut off, their legs are not cut off, they don’t know their fate. There are those who are supposed to be stoned to death. I am worried”.

” They are the only category of people that cannot be taken to court because they have already been convicted but there is no execution of the sentences”, he lamented.

The prison Comptroller however opined. that if their legs cannot be amputated, they should be given terms of imprisonment and if these cannot also be done, they should be granted pardon and counselled to be of good behaviour and released.

He also said that this has become necessary because, “I am highly worried, the officials in charge of them are also worried about their case. I want the government to execute the law as it is and if they cannot do that, the Governor has the power to give clemency to these convicts.”

According to him, the eleven women in Bauchi Prison are well taken care of by ensuring full separation from their male counterparts and essentially their needs are adequately provided for.

Suleiman Suleiman also said that the prison has a full-fledged hospital equipped with trained personnel and headed by a consultant physician to cater to the medical needs of all the Inmates.

“There is no single record of a woman being exploited in all the Prisons across the Command. Where a woman is admitted into a prison with a baby such a baby is well taken care of along with the mother until he/she is fully weaned before the child will be handed over to the immediate relations of either the mother or father.

“In the past, when a prisoner falls sick, we all fall sick because we will be thinking of where to get drugs to treat him or her, but today, since the current Comptroller General of the Nigerian Prisons took over, things have greatly improved as we have enough drugs in all our prisons”, he said.

He then expressed worry over the situation in the Prisons especially that of Bauchi saying that the water problem is the biggest challenge facing the service.

On the issue decongestion of the prisons, he said that already, the Federal Government has approved the construction of a 3,000 capacity prison stating that the State Government has secured 50 hectares of land and paid all compensations for the smooth take-off and completion of the project.