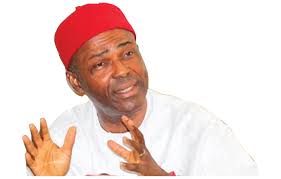 At least, sixteen persons sustained serious injuries when the convoy of the Minister and Technology, Dr Ogbonnaya Onu allegedly
rammed into a bus carrying passengers.

The incident occurred along the military cantonment axis of the Abakaliki/Afikpo highway.

The bus which its registration number could not be immediately ascertained was carrying passengers from Abakaliki to Uburu, Ohaozara local government area of Ebonyi state while the Minister’s convoy was heading to Abakaliki, the state capital.

The Minister, it was gathered was allegedly in the convoy and did not sustain any injury while all the occupants of the bus numbering over 16 sustained serious injuries and are currently receiving treatment at Accident and Emergency unit of Federal Teaching Hospital Abakaliki 2(FETHA 2).

Most of the victims were being treated by the side of the accident and emergency building as the ward was filled to its capacity when New
Telegraph visited.

Two of the victims broke their legs while others sustained serious head and leg injuries and were wearing bandages when our correspondent
visited.

One of them, Lawrence Okoro who sustained eye and head injuries, alleged that the Minister’s convoy left its lane to their own lane,
leading to head-on collision of the two vehicles.

He noted that though no one died in the incident but that all the occupants of the bus sustained serious injuries with some in critical
condition.

A staff of the hospital who did want his name in print said “there is no death recorded in the accident but many people sustained various
degrees of injuries and the minor ones, we have advised them to go because there is no space in the unit.

“We heard that the accident was caused by the Minister of Science and Technology’s convoy. He has left the hospital because he himself was
affected. They said he was unconscious by the time they rushed everybody here but we thanked God because he walked with his legs to his car and left the hospital. I don’t know where they kept the driver because the driver is equally affected.

“The driver of the bus is still on treatment inside the accident and emergency unit, he is the rightful person to speak on what actually
happened”, he said.