Maiduguri—United Nations, UN, Humanitarian Coordinator for Nigeria, Mr. Edward Kallon, has warned that humanitarian crisis in the North-East of the country is still very high, saying no fewer than 1.8 million persons have been displaced. 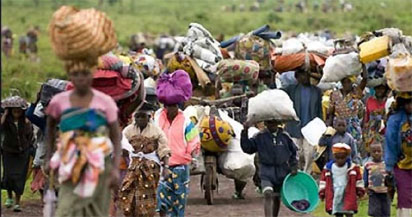 He said millions of civilians are grappling with extreme adversity across North-East and the rest of the Lake Chad region, where recent cases of violence have displaced tens of thousands more people, worsening already dire humanitarian situation.

In a statement, he called for support to respond to the humanitarian crisis that is now in its 10th year, saying “today, 2.5 million people are displaced across the Lake Chad region, with 1.8 million in Nigeria alone and 228,500 being refugees in neighbouring countries.

Returning Plateau IDPs to their homes

“A recent upsurge in violence in North-East has displaced over 80,000 civilians, who have sought refuge in crowded camps or in towns in Borno State and are surviving in arduous living conditions.

“Over 15,000 have fled to neighbouring Cameroon and Chad in the past weeks. The hostilities have also strained humanitarian operations and forced aid workers to pull out from some locations.

“We must sustain the efforts made over the recent years to ensure that aid reaches those who need it most. The decade-long conflict has brought immense suffering upon children, women, men, their families and communities.

“We have saved millions of lives, and as we strive to provide immediate response to new and existing humanitarian needs, we must also focus on addressing the causes of such untold suffering.”